With a pedigree of major fashion houses such as Alexander McQueen, Chloe in Paris and John Galliano, Lebanese designer Karen Karam is set to take the fashion scene by storm. 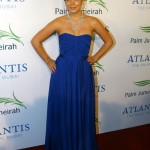 With the KAREN KARAM lable, Karam has achieved a brand that is super-cool, girly and at the same time refined. The brand is all about expressing your girly nature: playful, sexy and chic all in one.  She now dresses stars like actress Natalie Imbruglia and famous singer Lilly Allen.

Karam’s new A/W 2010 collection is a blast from the past with a new spin. The collection is inspired by one of the most treasured figures of Hollywood film and fashion: Breakfast at Tiffany’s star Holly Golightly.  The signature ‘little black dress’ is a key style in this collection but comes in many forms.  Karen has cleverly adapted each style to be either sexy chic or girly elegant to add a modern twist to the classic trend.

The collection also includes contrasting blends of feminine designs with a glint of Hollywood circa 1960s sophistication.  Karen uses frilled silks and chiffons to create vintage silhouettes and clever colour schemes to add a contemporary feel to the designs.

Karam has cleverly used the feminine contours of backbone and shoulder bone (rather than the traditional mini skirt) which result in elegant cocktail dresses which would compliment any woman’s wardrobe. Subtle equals sexy in this timeless yet quirky collection, now available worldwide. Karam’s work adds a touch of the avant-garde to the 60’s cocktail dresses and should not be missed this season! 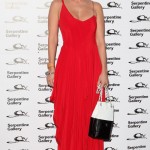 Karam has always dreamt about being a fashion designer. She graduated from Central Saint Martins in 2006, and her end-of-year press show gained significant media attention.  Her 2006 accessories, part of her final year collection, were sold at Colette in Paris. Karam has also worked for major fashion houses including Alexander McQueen, Chloe in Paris and John Galliano. Year 2009 marks the debut of he own fashion label KAREN KARAM. Karam’s works have been featured in Vogue magazine, among other publications.