Biker Fashion- For Him and Her 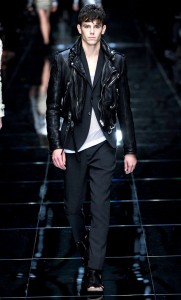 What precedes has largely looked at the motorcycle fashion trend for women, which is the norm given that modern trends generally start for women before being modified to suit men’s tastes. The motorcycle trend, however, emerges into men’s wardrobes at the same time this year, albeit it to a much smaller degree.

Spearheaded by a number of design houses, including Burberry, the main element of the men’s version of trend are statement jackets – unlike women’s where we’ve also seen a number of additional pieces. The colour palette is much muted as well: it’s all black, a fact that makes the trend rather cliche for men but not so cliche that the only motorcycle jackets on trend are Brando jackets.