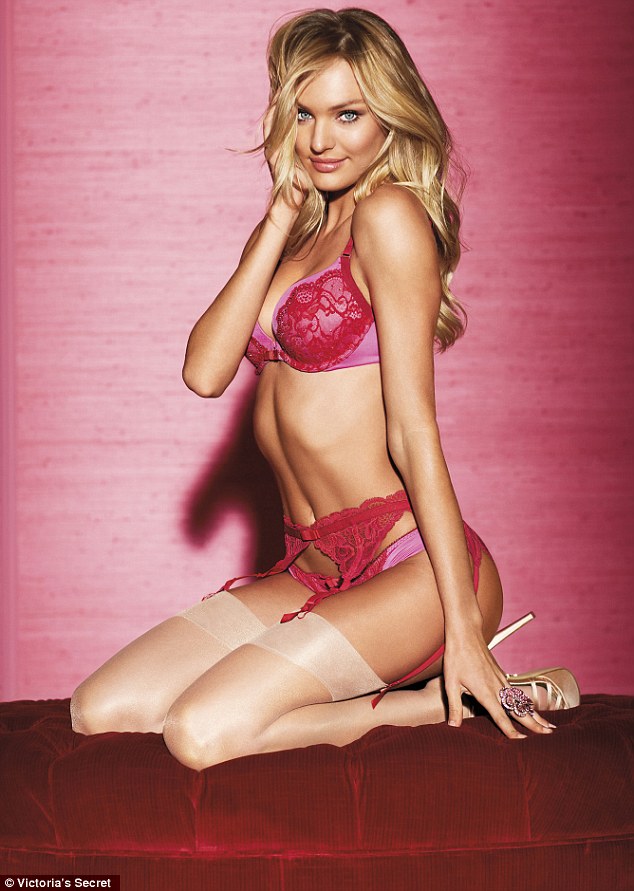 Some men find it difficult to buy lingerie for their female partners for Valentine’s Day.

But Victoria’s Secret supermodels Candice Swanepeol and Lily Alridge is making their job much easier.

The two stunners, along with fellow Angels Behati Prinsloo and Barbara Palvin, have modelled an array of V-Day themed lingerie sets for the company’s new Valentine’s Day campaign.
The genetically blessed women are seen posing in pink and red themed accoutrements in the steamy new shoot.

Lily, who is married to King of Leon frontman Caleb Followill, even goes topless in the shoot, protecting her modesty with a strategically placed arm over her chest.

Meanwhile, Candice is clearly the star of the shoot, displaying her supremely tanned and toned figure in a pink and red push-up bra, panties and a suspender and stockings set.

The 24-year-old gives a sultry stare to the camera as she gently nibbles on her finger.

The blonde beauty also strikes a classic Fifties pin-up pose as she perches herself on a plush red velvet ottoman.

Meanwhile, Karlie Kloss wears a similar set to Candice, but shows off her slender figure in a red-hot scarlet hue.
The 20-year-old seductively places a matching red eye mask over her face as she pouts for the camera.

The American beauty also changes into a pretty pink floral set in the shoot, again paired with vintage-style nude stay-ups.

Meanwhile, Lily also does her best pout for the camera as she models as more casual and playful liberty print and lace bra and panties.
The mother-of-one also runs her fingers through her glossy brunette tresses as she flashes her famous smile to the camera lens.

Barbara, who was recently caught in the middle of the Justin Bieber and Selena Gomez bust-up, meanwhile gets cheeky with the photographer.

The 19-year-old Hungarian model holds up a box of chocolates and winks to the camera as she poses in a pink and red satin and lace bra.
And just like Lily, Adam Levine’s squeeze Behati also goes topless in the racy shoot.

The 23-year-old Namibian model covers her chest with pink tulle as she runs her fingers up her leg whilst sitting on a floral chair in pink panties and matching pink heels.

Following the shoot, Candice and Lily slipped into some seriously sexy figure-hugging red dresses to promote the line at the Victoria’s Secret Herald Square Store in NYC on Wednesday.
Candice looked flawless in a cut-out short-sleeve body con dress, which showed off snippets of her toned tummy.

The South African stunner pursed her red lips together as she held up bras from the range alongside Lily, who looked equally sublime in a red lace dress.

During the event, the pair also revealed their favourite Valentine’s Day gift packs as they did meet and greets inside the store.
It has been a busy few weeks for Candice, who also attended the Super Bowl last weekend.

The supermodel was seen attending numerous events and parties posing alongside the AXE space man.

Before her trip to New Orleans, the blue-eyed beauty was shooting a VS swimwear campaign in St.Barts.