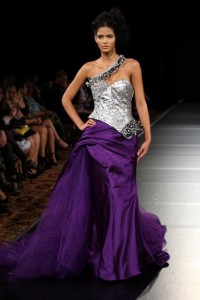 Lebanese fashion designer Amal Sarieddine make her first highly anticipated appearance at Couture Fashion Week in New York City. The fashion was held at the world-famous Waldorf Astoria hotel. Amal Sarieddine is a young Lebanese fashion designer who is following in the footsteps of her mother, acclaimed designer Nawal Sarieddine, who established her own prominent design house some forty years ago. After earning her degree in fashion and interior design from the Lebanese American University, Amal launched her own collection in Beirut in 2004, a city synonymous with luxury couture style and home to such fashion icons as Elie Saab, Georges Chakra and Georges Hobeika. Amal’s designs were immediately applauded and sought out by the cream of Middle Eastern society including many celebrities and the royal families of Saudi Arabia, Kuwait, Qatar and the United Arab Emirates. Her clientele also includes prominent socialites and celebrities from Europe and the United States.

A gifted designer known for her lavish and opulent evening and bridal gowns, Amal Sarieddine has presented her collections in the Middle East, Paris and Hollywood.