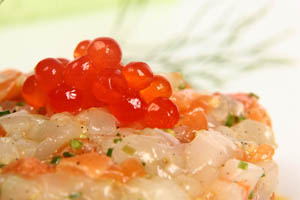 Sushi is both a modern culinary treat and a Japanese tradition dating back hundreds of years.sushi isn’t just raw fish. Fish is merely one of the many possible ingredients that can be added to sushi.

In this article, we’ll learn where sushi came from, find out about the different kinds of sushi, and explore what it’s like to visit a sushi bar. We’ll also learn how to make sushi at home.
When raw fish is served by itself it is called sashimi. Although sushi originally included raw fish, it can be made with a variety of ingredients.
In Tokyo, a city that contains the world’s largest fish market, nigiri-zushi usually takes the form of a morsel of rice with a carefully sliced piece of fish on top of it, while sushi from the Osaka region might contain cu*****bers and other vegetables or herbs rolled in rice and crisp seaweed, or nori.
In the United States, maki zushi is the most common form of sushi. This form involves rice and nori rolled up with the toppings on a bamboo mat, then sliced into small bite-size rolls.
So sushi is simply specially prepared rice served with various toppings in a variety of shapes and sizes. In fact, chirashizushi, sometimes called rice salad in the United States, is simply a bowl of sushi rice with toppings.
Sushi dates back almost one thousand years, when raw fish was preserved by storing it between layers of rice. Over a period of weeks, the rice fermented, and the chemicals produced kept the fish from going bad. Once the fermentation process was complete, the fish was ready to eat. Eventually, the Japanese began eating the rice and fish together. 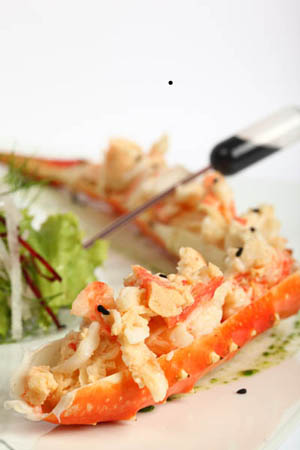 If you’re making sushi at home, you’re free to put whatever you like in your sushi. However, certain ingredients are considered “classics,” due to the traditions and tastes of Japanese cuisine.

Although raw fish isn’t required, some of the best sushi is made with this ingredient. Several varieties of tuna are among the most famous sushi ingredients, The higher the fat content, the more prized the meat, with the belly meat of the bluefin tuna, known as toro, at the top of the list. Raw tuna meat comes in varying shades of pink, and has a rich, almost buttery flavor. Mackerel is also common. Salmon, caught at sea, is a sushi favorite. Other seafood sushi toppings include shrimp, squid, octopus, eel, clams, and roe (fresh fish eggs).
Tamago is a specially prepared omelet made by adding thin layers of egg until they form a dense, inch-thick slice. Avocado in Japan means “tuna of the land.” Cu*****bers and mushrooms are also high on the list of non-seafood sushi ingredients.
At the Sushi Bar
Eating at a sushi bar is a little different from eating at a regular restaurant. Newcomers don’t have to worry, though — sushi bar staff are known for being helpful.
The bar itself surrounds the area where the sushi chefs operate. Your chef might have suggestions regarding what is in season or what he thinks you might enjoy, so don’t be afraid to ask. Sushi is ordered directly from the chef, while drinks and other foods, like soup, are ordered from servers. 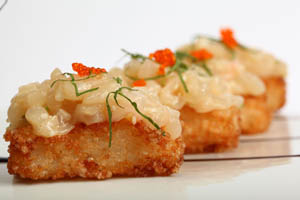 Sake is a traditional sushi bar drink, but sake and sushi are not consumed at the same time — they are both rice-based, so the flavors are not considered complimentary. Light beer (Japanese or domestic) or green tea are considered good drinks to have with sushi. Water or sparkling water works too. If you choose to drink sake, don’t forget to pour for the person you are eating with, and allow them to pour sake for you. It’s consideredimpolite to pour for yourself.
Sashimi, which is often served at sushi bars, is always eaten with chopsticks. Sushi can be eaten with chopsticks, but it is also acceptable to eat it as a finger food. Soy sauce should be used sparingly, and only the edge of the topping should be dipped, never the rice. Soaking the sushi in soy sauce is an insult to the chef.
Sushi Bar Lingo
• Itamae-san – head chef
• Irrashai mase – You might hear the chef shout this. It means, “Come in, welcome.”
• Gari – pickled ginger
• Ohashi – chopsticks
• Shoyu – soy sauce
• Sushi-Suki? – Do you like sushi?
• Wasabi – horseradish-like condiment
Making Sushi at Home: Choosing Fish
Sushi is not usually made at home in Japan. Sushi bars are nearly ubiquitous there, and the Japanese often feel that only an expert sushi chef can make proper sushi. When they eat sushi at home, they order it. However, for special events, making sushi at home can be fun and delicious.
If you decide to use raw fish in your sushi, be very careful where you buy it. You can’t use just any raw fish — look for sushi- or sashimi-grade fish. You may have to check out Japanese markets or ask at a local sushi bar. Regular fish is not handled with the intention of raw preparation, so it is likely to contain bacteria and parasites that can only be removed by cooking. Fresh water fish are not suitable for eating raw.
Making Sushi at Home: Preparing Rice 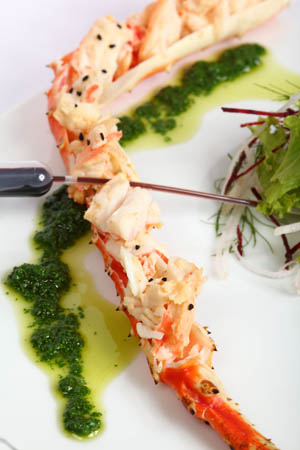 The first step in making sushi is preparing the rice. The rice itself can be any white medium or short grain rice, but Asian food markets sell rice that is labeled “sushi rice.”
The rice must be rinsed until the water runs almost clear from the rice. Do this carefully to avoid mashing or breaking the rice. A strainer can be too rough, but gently swirling water around the rice in a pot works well. The rice should then be soaked in cold water for half an hour, then drained.
You can add a little sake (Japanese rice wine) and a piece of dashi konbu, dark green dried kelp, to the rice before cooking. Bring the rice to a boil and cook it on medium heat with the lid on the pot for 15 minutes, then simmer for another 20 minutes or so over low heat. When the rice is done, turn the heat to up to high for a few seconds. Once the heat is off, let the rice sit for 15 minutes.
While the rice is soaking and cooking, you can prepare the vinegar. Asian markets sell bottles of pre-made sushi vinegar, but making it yourself is easy. You start with rice vinegar — no other kind will work. Then add sugar and salt. In their book “Sushi for Dummies,” authors Judi Strada and Mineko Takane Moreno recommend ¼ cup of vinegar, 1 tablespoon of sugar and 1½ teaspoons of salt for five cups of rice. These ingredients should be stirred until the mixture is clear, and can be refrigerated. However, it should be room temperature when added to the rice.
Mixing the rice and the vinegar is a slightly more complicated process than simply dumping it in and stirring. First, the rice must be “turned out” into a bowl. Traditionally a flat wooden bowl is used, but any glass or plastic bowl will work (metal would react with the vinegar). A low profile bowl will allow the rice to cool evenly. “Pry” the rice out of the pot with a spatula or a wooden sushi paddle that has been moistened in the vinegar, tipping the pot upside down and slipping the rice into the bowl. Don’t forget to take out the dashi konbu. Then hold the paddle over the rice and slowly pour the vinegar over it. Move the paddle around over the rice so the vinegar is evenly distributed. Stir the rice by gently dividing it with the paddle and turning it over. At the same time, wave a fan briskly over the rice to help it cool quickly. When the rice stops steaming, you can stop turning and fanning. Cover the rice with a moist towel until it is served, and keep it at room temperature.
Making Sushi: Nigiri-zushi and Temaki
Toppings need to be sliced so they’ll fit into or on top of the sushi. The slicing is an art form all by itself. Toppings can be diced, minced, shaved, slivered, or cut into matchsticks.
Finger sushi, or nigiri-zushi, is made by forming a small morsel of rice into an oblong shape. Dip your fingers into vinegar water first, then shape the rice in the palm of your hand. Don’t squeeze the rice together too hard, just enough to make them stick together.
Use your thumb to make a small indentation on one side of the sushi. This side will be the bottom, so the piece of sushi should curve upward slightly in the middle when you set it down.
It’s easiest to make several pieces of nigiri-zushi first, and then add the toppings. You can simply put the toppings on, or add a streak of wasabi first. A strip of nori could also be wrapped around each sushi piece, but if you serve sushi with nori, it should be served immediately, while the nori is still crisp.
Now we will make a hand roll, or temaki. This is a cone of nori with the rice and toppings inside. Start with half a piece of nori. Temaki are easiest to make holding the nori in your hand. Spread rice onto one end of the nori, covering about a third of it. Place your toppings diagonally across the rice.
Fold the bottom corner up and over the toppings, then start rolling the nori in the same direction. When you finish rolling, you should have a cone-shaped piece of sushi. The moisture in the rice will help the nori stick together.
Making Sushi: Futomaki and Uramaki 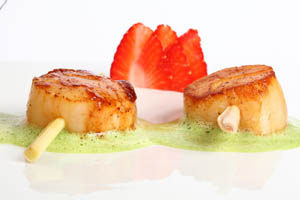 Makizushi is rolled sushi, and it comes in several varieties, depending on the exact shape and size.
Futomaki is what many people think of when they think “sushi.” First, put a sheet of nori on your bamboo mat, shiny side down. Cover about two-thirds of the nori with rice Place your toppings across the rice.
Fold the bamboo mat over, rolling the nori onto the toppings. Be careful not to roll the mat into your sushi. When the mat touches the far edge of the rice, begin tightening the roll.
Hold the roll with the mat over it, and grab the far edge of the mat. Pull on it at each corner and in the middle to tighten the roll. When the roll is tight enough, finish rolling by pulling the mat forward. You can repeat the tightening process first if you need to.
Now you have a complete futomaki roll. Slice the roll in half with a very sharp knife, pressing straight down through the roll to avoid tearing the nori. Slice each half twice more to end up with eight pieces of makizushi.
Inside-out rolls, or uramaki, are made just like futomaki, but you start with a piece of plastic wrap over the bamboo mat, and spread the rice directly onto it. Then add the nori over the rice, with the toppings placed on top of the nori. Roll it exactly like futomaki.
The completed roll can be covered in sesame seeds or another garnish before slicing.
A variety of sushi looks very appealing and makes a great hors d’oeuvre. Don’t forget the soy sauce and wasabi for dipping, and ginger root for cleansing the palate between pieces of sushi.