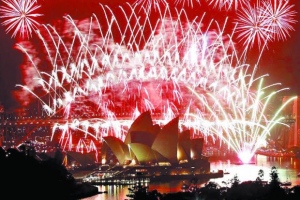 From Singapore to Dubai, at landmarks such as the London Eye, Berlin’s Brandenburg Gate, the Champs-Elysees in Paris and Red Square in Moscow, hundreds of thousands took to the streets to bid farewell to 2010 and welcome in 2011.

Dubai
New Year was ushered in style with the world’s highest fireworks organized by Emaar Properties, the developer of Burj Khalifa. Positioning Dubai in the league of Paris and New York for New Year’s Eve celebrations, the Burj Khalifa gala was a unique triumph for the city, trumpeting its journey into new beginnings, after passing through two challenging years. In a way, the Burj Khalifa celebrations were a reminder to the world that Dubai’s ambitions continue to be robust and real. 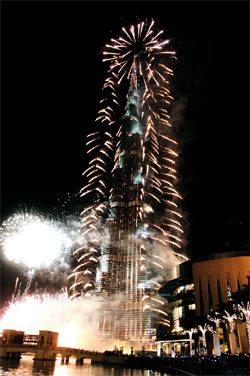 New York
In New York, a crystal ball with 32,000 lights descended at midnight, setting off a wild and noisy confetti-filled New Year’s Eve celebration, the largest in the US.

Paris
In Paris, an estimated 235,000 people were on the Champs-Elysees with a further 35,000 around the Eiffel Tower.

London
In central London, about quarter of a million revellers saw in 2011 as red, white and blue fireworks shot from around the London Eye, lighting up the sky over the River Thames.

Sydney
Sydney painted the town red as the famous harbor bridge and Opera House set the benchmark for how to see in 2011. The city’s skyline traditionally produces the biggest and most spectacular display – and this year was its biggest since the Millennium, with seven tones of fireworks attached to the bridge, which lit up the city in a hue of red.

News from AP and Khaleej Times