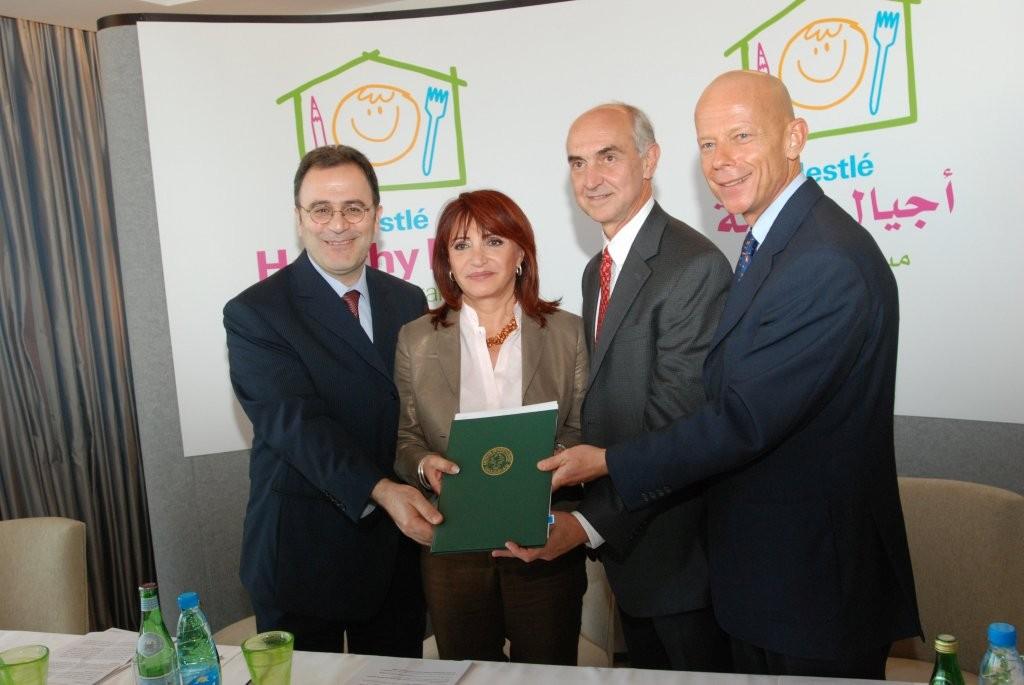 Both established in 1866, the American University of Beirut (AUB) and Nestlé have joined hands 144 years after their mutual birth to help bring a healthier future to the children of Lebanon through the launch of the “Nestlé Healthy Kids Global Program – Ajyal Salima,” a coming together of an AUB initiative – “Kanz Al-Soha” – and a global Nestlé program – Nestlé Healthy Kids – which share the common aim of entrenching nutritional awareness, better eating habits and a more active lifestyle among 9-11 year-old schoolchildren in Lebanon, and progressively the rest of the Middle East. The collaboration also entails a three-year research aspect, to be conducted by AUB thanks to a grant provided by the Nestlé Healthy Kids Nutrition Research Fund.

“Childhood is the vital stage for promoting obesity prevention programs, and education is the single most powerful tool for ensuring children understand the value of nutrition and physical activity to their health through the course of their lives,” said Manghardt. “Our studies found obesity in Lebanon is mainly due to poor dietary practices, with the least physically active adolescents and children being the most overweight,” said Dorman. “This highlights a clear need to draw on the latest scientific evidence to take action as we are doing with Nestlé now, and to further recommend mobilization efforts to the government, international agencies, and local communities.”

“Although being overweight should be considered a disease on its own, it is also one of the key risk factors for other conditions including type 2 diabetes, hypertension, and some forms of cancer,” said Hwalla.

“The objective of the Nestlé Healthy Kids Global Program is to raise nutrition, health and wellness awareness of school age children around the world,” explained Manghardt. “It focuses on improving basic knowledge of nutrition and physical activity levels in children through activities. The program is part of Nestlé’s Creating Shared Value – which is a fundamental part of Nestlé’s way of doing business. It means that for a company to be successful, it should not only create value for shareholders but also for society at large.”

Launched in New York in April 2009, “Nestlé Healthy Kids Global Program” will be progressively unveiled in all countries where the Swiss-based company has direct operations including other locations in the Middle East. By the end of 2011, it’s expected to reach a total of 80 programs worldwide.

“This collaboration is being done with AUB, the region’s leading education and nutrition research institution, which is why it also includes research projects over the coming three years aiming to assess and address nutritional problems in children in the community and implement sound interventions for positive
behavioral and lifestyle change,” concluded Manghardt.

Program implementation varies from one country to the other, according to specific local requirements. The one for the Middle East being launched in Lebanon is based on “Kanz Al-Soha,” a program developed by the AUB/FAFS.

It was created as a component of a thesis required for completion of a PhD degree in nutrition entitled: “Interventions to promote Healthy eating and Physical activity in Lebanese schoolchildren” being completed by celebrity nutritionist Carla Habib Mourad with advisory guidance from Dr. Hwalla.

Nestlé Healthy Kids Global Program – Ajyal Salima” involves 12 educational sessions spread over 3-4 months in around 60 public and private schools nationwide over the next three years. The sessions include interactive learning and hands-on activities on nutrition, healthy eating and physical activity; as well as questionnaires developed to track improvement of children from pre to post interventions.

It encourages the intake of a balanced and varied diet; fruits and vegetables consumption to 5 or more a day; breakfast and healthy snacks intake; and regular physical activity; as well as controlling high fat, high sugar foods and beverages intake; and reducing time spent watching television, on the computer or playing video games. It also involves supporting school snack shops in providing kids with healthier options, and aims to conclude with research findings boosting AUB efforts to establish National Food Based Dietary Guidelines endorsed by the government.