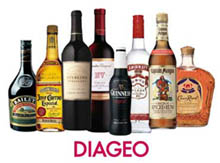 Diageo is a leading multinational company that produces alcohol brands like wine, beer and other kinds of spirits. Diageo comes from the Latin word “dia” and the Greek word “geo” meaning day and world, respectively. The name was kept in tune with the company’s aim to provide Diageo drinks that would be consumed daily in every part of the world. In the year 1997, Diageo Company was formed as a result of the merging of 2 companies – Grand Metropolitan Plc and Guinness Plc. Diageo has its headquarters in London and the chairman of the company is Lord Blyth of Rowington. The CEO of Diageo is Paul Walsh.
Diageo’s business is carried out with a superb assortment of alcohol brands . The innumerable alcohol brands that Diageo deals with are:

Diageo spirits company has its reign across the world and trades in markets in as many as 180 places. Diageo basks in the glory of having being listed both on the New York Stock Exchange and the London Stock Exchange. The company has about 80 Diageo offices in the world and has more than 20,000 employees who perform their jobs with dedication. 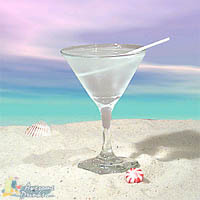 Martini and Rossi has also launched a new range called Martini Minis, which are small bottles that fit conveniently into your fridges.

Pernod Ricard
Pernod Ricard is a notable company that produces and markets superior alcohol brands and is functioning from 1975 . It is a giant group which comprises 15 leading and 30 regional brands. These companies *****ulatively account for the growth and success of the Pernod Ricard Group . The 15 major brands of Pernod Ricard are : 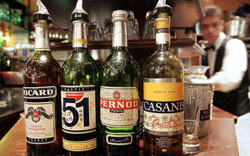 Pernod Ricard Cognacs and Brandies make the group a leader in this zone. Cognac is a spirit which has a wine-base and is produced from particular vines. It has to be aged in oak barrels for 2 years whereas brandies are aged for a minimum of 1 year. Pernod Ricard Rum and Cachaca, both are made by fermenting and distilling the juices and molasses of sugar cane. The company also produces huge quantities of tequila, gin, bitters, wines and vodka.
Pernod Ricard is an immensely successful company which stands as the 2nd largest producer of wines and spirits in the world.
Remy Cointreau 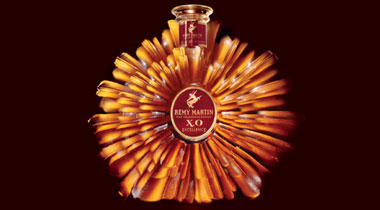 Remy Cointreau is a producer of alcohol brands and it is at par with other leading spirits and wine companies of the world. The Remy Cointreau brands are renowned for their quality as they maintain the wine-making tradition which is older than a century.
The history of Remy Cointreau dates back to the early 1700s. It then moved forward to 1991 to form the Remy Cointreau Group, when the companies Remy Martin and Cointreau merged together. The company acquired many international alcohol brands. The various brands under the group are:

The Remy Cointreau wine-experts use their distinct art and techniques to manufacture their cognacs, champagnes, liqueurs and spirits . Remy Cointreau Fine Champagnes are of the following types: V.S.O.P., X.O. Excellence, Louis XIII Grand Champagne. The markets of Remy Cointreau Cognacs span across Europe, U.S.A, and Asia.

The innovative collection of Remy Cointreau Liqueurs include Ponche Cuba, Passoa, Cointreau and Izarra. “ Passoa” is a unique combination of exotic fruit flavors. Cointreau has its biggest market in the US. “Metaxa” uses aged wine, muscat grape and other plant extracts to get its sweet taste. The Piper-Heidsieck champagne produces:

Remy Cointreau alcohol brands have their markets in more than 150 countries. The networks which distribute their goods are Remy Cointreau USA and Maxxium in Asia and Europe.

The local Australian brands that it manages are :

The brands of New Zealand are Church Road, Corbans, Triplebank and Lindaeur. The company also distributes brands like:

The company has some 2000 odd employees It has a turnover of about AUD $1.2 billions.

Orlando Wyndham upholds its values and believes in total commitment to its consumers Orlando Wyndham is the leading producer of spirits and wine in the Pacific region.
Bacardi
Bacardi is a private alcohol brand which manufactures, sells and distributes spirits or alcohol s, which are recognized throughout the world. The company Bacardi Limited was founded in the year 1862 in Santiago de Cuba by Don Facundo Bacardi Masso . There are other products which are owned by the Bacardi company, such as “Dewar’s Blended Scotch Whisky”, “Bombay Sapphire Gin”, “Eristoff Vodka”, “Grey Goose Vodka” and “Cazadores Tequila”. 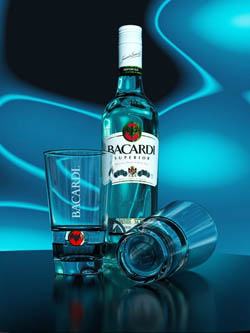 Initially rum used to be considered a cheap and unrefined alcoholic drink. Don Facundo Bacardi made several experiments and matured the drink in barrels of oak to produce the final well-acclaimed white rum . Today, the headquarters of Bacardi is in Bermuda. When the Bacardi Company started, it solely produced rum but it gradually made other acquisitions, thereby also selling gin, vodka, whisky and other forms of alcohol.
The Bacardi distillery in Puerto Rico is surprisingly called the “Cathedral of Rum”. The legacy of the Bacardi Company has been built with a lot of effort and great emphasis is given on the quality, repute and originality. The company makes meticulous improvements in the Bacardi brands which are loved by millions. In 1992, the chairman of Bacardi , Mr. Manuel Jorge Cutillas devised the idea of merging 5 separate companies to form the giant spirit company called Bacardi limited .
The very popular Bacardi products are “Bacardi Breezer”, “Bacardi Black”, “Bacardi Superior”, “Bacardi Oro”, “Bacardi Anejo”, “Bacardi151”, “Bacardi Reserva Limitada” and “Bacardi 8”. Bacardi also sells flavored rums like “Bacardi Limon”, “Bacardi Big Apple”, “Bacardi Vanilla” and many more, giving rum-lovers a delightful list to choose from.
Bacardi enjoys the status of a perfect alcohol brand and is famous for the Bacardi rums and Bacardi *****tails .
Malibu
Malibu is one of the most famous names among the world’s biggest alcohol brands. It remains one of the exclusive rum makers in the world. 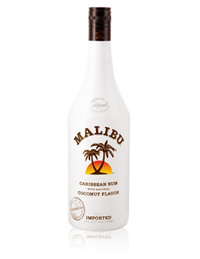 Introduction:
Unlike what the name suggests Mailbu or Malibu rum, as it is better known, is made in Barbados. Things don’t end just there. Even the bottling of Malibu does not happen anywhere near Malibu. The bottling of Malibu is done further off in Dumbarton in Scotland. Pernod Ricard takes care of the bottling of Malibu.
Specialty of Malibu:
The specialty of the rum lies in the fact that it comprises of natural coconut extract as one of its main ingredients. The Mailbu rum is a clear drink; though it does come packaged in a white and opaque bottle. However, the Malibu is slightly on the viscous side as compared to regular rum; what with the presence of coconut extracts.
History of Malibu:
Malibu was first concocted in the year 1895. Quite immediately the popularity of the drink spread and Malibu became an instant success worldwide. It was marketed as a drink that was “Seriously Easy Going”. In a sharp contrast from the stressful lives in the West and their preferences for hard drinks, Malibu was something that began to be associated with lots of leisure and relaxation.
The success of the initial Malibu prompted the production of various flavors of the drink. The Malibu Lime was the first among them. However, the popularity level did not go anywhere. This caused the drink to sink without a trace by the year 2003.
Types of Malibu:
However, this did not stop the company from curbing their experimentations with Malibu. Today there are numerous variations and flavors of Malibu. Some of the others are listed below:

Captain Morgan is one of the renowned alcohol brands of the world that sells rum. The company gets it name from Henry Morgan, who was a 17th century privateer of the Caribbean Isles. Initially the Seagram Company used to produce rum for Captain Morgan Rum Company . For the first time in 1984, USA had its taste of Captain Morgan Original Spiced Rum. In the beginning, Captain Morgan was a Jamaican brand and now the production is managed by The Diageo Company. The rum bottles have the trademark label of Henry Morgan, the pirate. 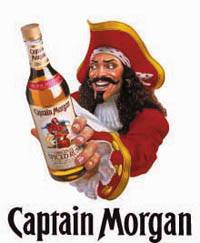 The Captain Morgan products come in exciting flavors. Some of them are Captain Morgan Original Spiced Rum which is favored for having subtle hints of fruit flavors like vanilla and a dash of spices. Captain Morgan Tattoo is black and daring in its appearance and taste and it can be served right from the bottle or mixed with any other drink. Captain Morgan Parrot Bay is available in 4 irresistible fruit flavors like passion fruit, pineapple, coconut and mango. They can be added to soda or fruit juices to produce exciting drinks.
Captain Morgan Private Shock is full-bodied and has a very satiny taste. Captain Morgan maintains the highest standards of the company’s tradition which stands for more than 300 years. Captain Morgan Silver Spiced Rum has the richness of Puerto Rican rum and the zing of exotic spices. The rum gets its smooth and full-bodied taste by aging it in oak casks for more than one year.
Captain Morgan rums are enjoyed throughout the world because of their unparalleled taste and quality.
UB Group
The UB Group was founded in 1915 by Thomas Leishman, a Scottish man. The company learned the process of beer-making from a South Indian brewery. Vittal Mallya was the first director of the company of Indian origin. UB Group or United Breweries has its markets in India and abroad. The group not only produces alcoholic beverages but has a dominant hold on industries like agrochemicals, pharmaceuticals, fertilizers, international trading, infrastructure development and media.
The UB Group chairman is Vijay Mallya who has played a major role in taking the company to its summit. The company has grown at a rapid rate and exports UB Group products to the entire world. As a marketer of alcohol brands, UB Group is the third largest in the world. The various alcohol companies under this group are McDowell and Company Limited , Herbertsons Limited and Shaw Wallace and Company Limited. 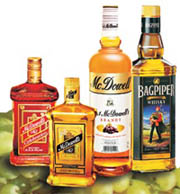 McDowell’s No.1 brandy is the brandy that sells in the greatest number in the world. Bagpiper Whisky is the largest selling whiskey in India. McDowell produces as many as 140 brands for people with different tastes. The alcohol brands under Herbertsons Limited are Bagpiper Whisky and Honey Bee Brandy . This company was included in the UB group in 1973 and it annually sells 12 million bottles.
Shaw Wallace is a very old company which existed in British India and very recently, in 2005, it became a part of the UB Group . United Breweries Limited is the most important brewing company of the group, which has brands like Kingfisher, London Pilsner, Kalyani Black Label, Premium Ice and UB Export.
The UB Group is soaring in its production of spirits and is associated with a lot of prestige and honor.