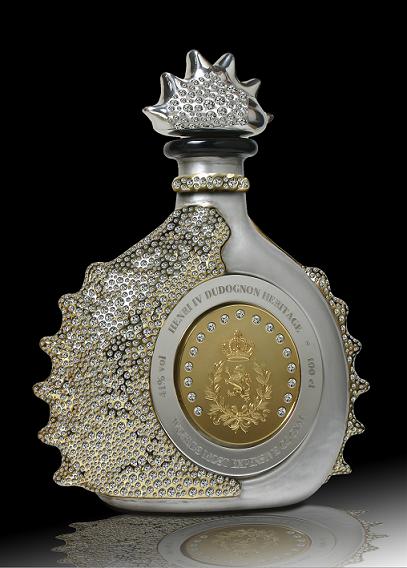 Cognac is usually referred to as one of the most expensive alcohol in the world. Like Champagne, it is named after the area of France its originated from.

The only two criteria required by the Bureau National Interprofessionel du Cognac (BNIC), the body that has ultimate control over whether or not a brandy may be called Cognac is that the brandy must be produced in the area surrounding the town of Cognac and it must be made at least 90% from three varieties of grapes that grow in the region—Ugni Blanc, Folle Blanche or Colombard grapes.

Considering the specific processes required to produce the most basic variety of the drink, the most expensive Cognac in the world must be something special indeed.

Called Henri IV Dudognon Heritage after the French king whose descendents have been producing this wine since 1776, this particular wine was aged for 100 years in barrels that was air dried for five years before use. The final product is 41% alcohol (82 proof).

That alone wasn’t enough to make it the world’s most expensive Cognac, though. The priciest aspect isn’t the wine itself, but the packaging. Dipped in 24k gold and sterling platinum, the bottle was adorned with 6,500 brilliant cut diamonds by its designer, jeweler Jose Davalos.

The final price of this costly Cognac is US$2 million.