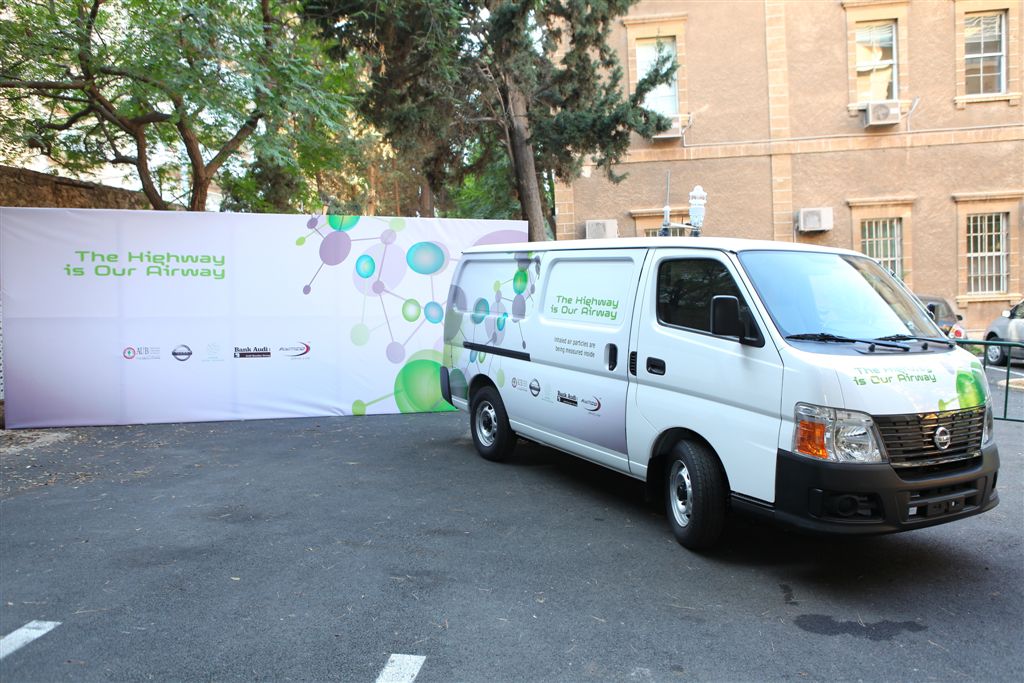 The Atmospheric and Analytical Laboratory (AAL) at the American University of Beirut (AUB) under the supervision of Dr. Najat A. Saliba with the support of Rasamny Younis Motor Company – RYMCO, Nissan’s exclusive dealer in Lebanon and Bank Audi sal – Audi Saradar Group launched their new environmental study that aims to monitor the air pollution caused by traffic.

A first of its kind in Lebanon, this project will measure the particulate matter (PM) generated by biogenic and anthropogenic sources among which vehicles are major contributors through a real-time device installed in a Nissan Urvan moving Van. The van, exclusively offered by Nissan for this project, will travel along a busy road connecting Beirut to Jounieh for one year starting today from 7:00am until 10:00 am and from 5:00pm until 8:00 pm on both sides of the roadway.

“In Beirut, as in many other overpopulated capital, traffic is the main source of air pollution,” said Dr. Najat A. Saliba, specialist in air pollution and Associate Professor at the Chemistry Department at AUB. “Numerous studies have determined that air pollution caused by traffic near residential areas affects the health. We aim throughout the year to study, understand and assess the levels of PMs so that the results will benefit the public sector and guide them in their pursuit of new and efficient rules and regulations.” She added.

“Being part of the automobile industry mandates that we take a responsible role in developing strategies to help address air pollution and its consequences, one of the highest priorities of environmental issues in line with Nissan two-pillar strategy for year 2010”, said RYMCO’s CEO, Abdo Sweidan. “We are confident that if more companies realize the impact of simple measures such as these have on reducing environmental harm, perhaps more of them will become carbon neutral,” he added.

As for Mr. Ibrahim Salibi, Assistant General Manager – Head of Corporate and Commercial Banking at Bank Audi sal – Audi Saradar Group, he added: “As the leading bank in Lebanon, we strongly believe we have a civic role to play within the community we operate in. It is from this perspective that we owe it to ourselves and to society to give the environment the importance it deserves. This specific initiative of measuring the quality of the air and the pollution in Lebanon is key to the blooming of environment-friendly schemes which can only contribute to the well-being of the community.”

Measuring PM levels will report, for the first time in Lebanon, drivers and passengers’ exposure during their travel to and out of Beirut. Results will serve as basis for studies on the impact of traffic pollution on the population’s health while highlighting to the public sector the imminent need for traffic measurements and regulations.