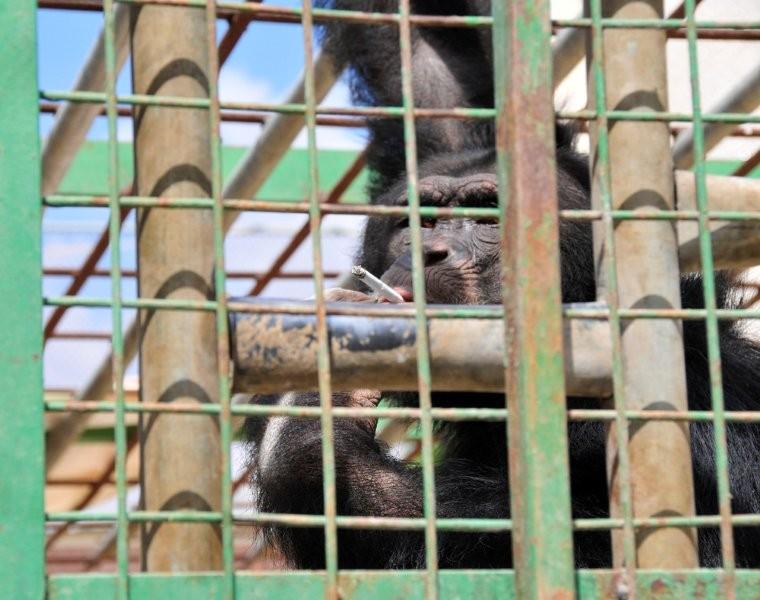 Most of us have heard the story of the 12-year-old chimpanzee, Omega, who was rescued by Animals Lebanon (a non-governmental organization) after they discovered him smoking cigarettes to entertain visitors at a Lebanese zoo, is finally in a safe place. 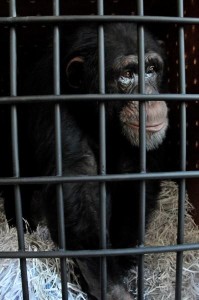 Omega was locked in a small cage for 10 years, in a substandard zoo in southern Lebanon. When he was young he was trained to do tasks in a restaurant, but soon became too strong and unwilling and has been locked up ever since. Omega has never climbed a tree or seen other chimpanzees, but what he did was caught up the bad habit of smoking cigarettes. How? He puffed the cigarettes thrown at him by zoo visitors.

The chimpanzee was flown to a sanctuary in Brazil after being rescued from a zoo in southern Lebanon.  Animals Lebanon was notified about the small zoo in April 2010, and successfully campaigned to close the zoo and send the animals to sanctuaries.

Omega was used in a restaurant for two years when he was still young, serving narguileh water pipes to customers.  After he was no longer able to be controlled, Omega was given to the zoo and has languished alone for the last eight years in a small cage.

Located in the village of Ansar, the zoo was built on the grounds of what used to be a detention camp during Lebanon’s civil war.  The owner recognized that the animals are not being kept in appropriate conditions and agreed to turn over all animals. 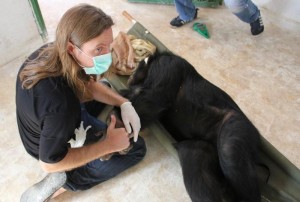 The Curitiba sanctuary in Brazil has agreed to care for Omega for the rest of his life, while the hyena, baboons and other animals at the zoo will be sent to sanctuaries in Lebanon and internationally.

“There is still no licensing or regulating of zoos in Lebanon,” said Lana El-Khalil, President of Animals Lebanon.  “This is the third zoo we have worked to close down, and until the remaining zoos meet international standards Animals Lebanon will continue to campaign to have conditions drastically improve or the zoos closed.”

Chimpanzees and other highly endangered wildlife continue to be smuggled into and through Lebanon, and recently have been found at a gas station and restaurant, and in private animal collections.

In a country where there’s virtually no animal rights protection, the initiative taken and achieved through the help of the NGO and donations was a breakthrough.

The NGO received donations through their website to help Omega travel his new South American home, where he will interact with other chimpanzees for the first time in a decade. The location will offer Omega a home as close to his natural environment as possible. It is specialized to house chimpanzees, and already has two groups of the apes, previously rescued from circuses. 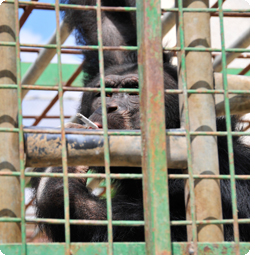 “We are very pleased the day passed with out any problems. Emirates SkyCargo flew Omega for half cost, and the Brigitte Bardot Foundation provided partial funding to help with the move. A vet with primate experience was brought in from the UAE to help with,” the NGO declared.

However, there is a bigger picture – that of prevention of cruelty to animals in the first place – with which they are also focusing on.

They have been lobbying the government for tighter regulation concerning animal welfare in Lebanon; rules to bring in animals have been made tighter by the government, tighter entry requirements for primates.

The NGO is currently finalizing draft animal welfare legislation which will be presented to the government before the end of the year. It will detail laws regulating zoos, and the trade and private ownership of endangered species, such as chimpanzees, which are facing extinction in several of their original habitats in the wild.