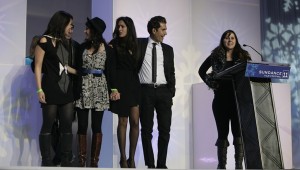 Atafeh and her brother, Mehran, have grown up in a home filled with music, art, and intellectual curiosity. Atafeh dreams of fame and adventure, and she and her best friend, Shireen, explore Tehran’s underground scene with youthful exuberance and determination to be themselves. Meanwhile, Mehran returns home from drug rehab, and renounces his former decadent life with a vengeance. His once obsessive practice of classical music soon finds more destructive outlets.

Having lost his parents’ trust, Mehran is jealous of Atafeh’s loving relationship with their father and tries to find new meaning in his life. He relentlessly watches his family and slowly becomes estranged from them. As Mehran disapprovingly observes a budding relationship between Atafeh and Shireen, he becomes obsessed with saving Shireen from his sister’s influence.

The once close siblings find themselves at dangerous odds with each other. As violence and desire collide, the once safe haven of the family home becomes increasingly claustrophobic and threatening.

Based on personal experience of Maryam Keshavarz

“CIRCUMSTANCE is based largely on my personal experience-as a young woman in Iran navigating the labyrinth of the once familiar, and yet alien, world of the nation’s underground life-and the characters of the film are very loosely based on close friends and family. I have spent my entire life living back and forth between Iran and the United States-spending school years in New York and the summers visiting family in Shiraz.  So at once, I have been both the insider and outsider. From that perspective, CIRCUMSTANCE is a glimmer into the inner world of Iran.

I was always struck, from the moment I would land at Mehrabad airport in Tehran in early summer, that I was stepping into not only another country, but also another world that existed with its own set of rules, codes, and language. Walking down the street, I could be –and was – detained for the amount of hair showing from my veil, questioned as to the relationship of a male cousin I was walking with in public (Iran restricts interaction between the sexes) and even stopped to be inspected for what books or CDs were in my bag. This violation of my personal freedom, especially as a woman, which seemed random but ever present, had a profound effect on me. I was at once horrified at the state of repression that people had to live in, but was so impressed with the ability of Iranians to live with these restrictions, and simply learn to navigate them as one would navigate road barriers.

At the center of CIRCUMSTANCE stand two girls, dreamers from opposite sides of Iranian society, who live in contrast to the tough environment from which they evolve. Fantasy is a way for these girls to escape the realities of their repressive environment. In CIRCUMSTANCE, fantasy operates on several different levels: the daydreaming at school, the musical sequences, the sexual fantasy of escaping to Dubai, and the fantasy of sexual freedom through the creation and recreation of cinema. Atafeh and Shireen’s fantasy life is rich in the film— it is a feminine space where the state’s attempt to control all social interactions is foiled, and it is the only place in which the girls can truly be free.”