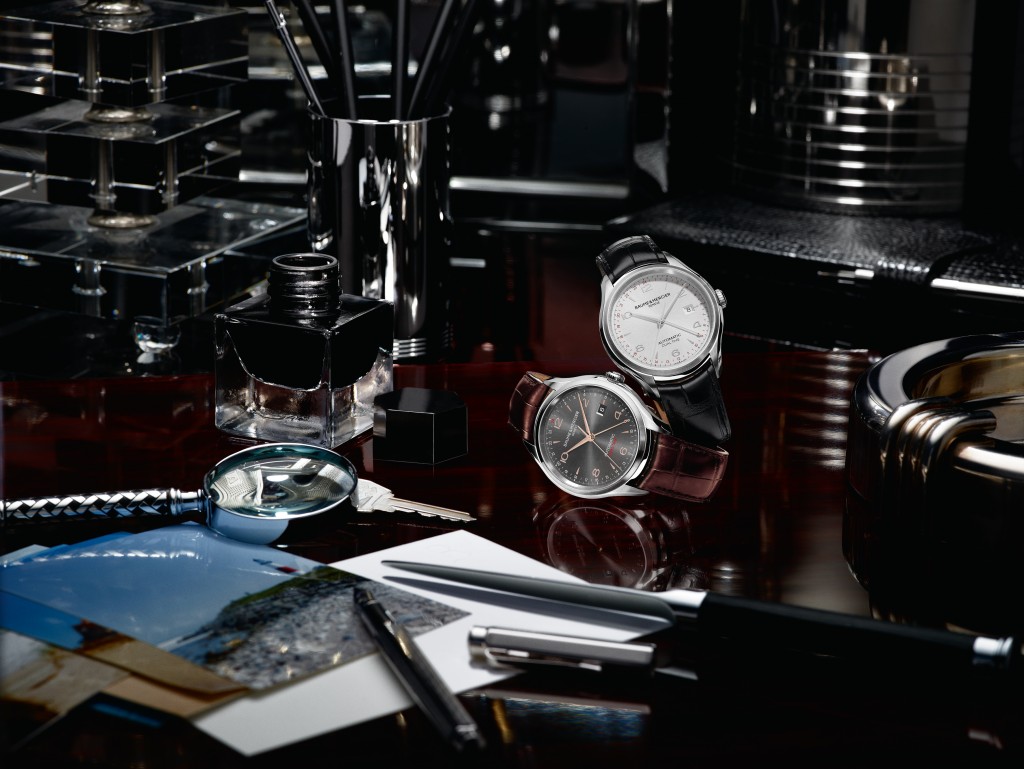 Since Baume & Mercier was founded in the heart of the Swiss Jura in 1830, it has continued to expand into new markets around the globe, and travel has become an essential part of its history. That is why it was a natural choice to add a Dual Time watch to the Clifton collection: a watch that functions in such a way as to enable the simultaneous display of two different time zones on its dial. This efficient, understated piece fulfills the needs of metropolitans who travel for professional or personal reasons and who wish to check the time at home, as well as the time where they are, at a glance.

The art of travel makes up part of the historic heritage of Baume & Mercier, as the Swiss watchmaker understood the importance of taking its influence beyond the boundaries of Europe as early as the 19th century.

Aware of the potential that the new territories represented, the company, formerly known as Frères Baume, established a branch in London as early as 1851 under the name Baume Brothers. The company’s activity, which had its beginnings with a focus on the Swiss Geneva area and the British Empire, would reach North America when a subsidiary was opened in Philadelphia in 1876. A vast network then formed, encompassing India, Africa and even Australia, New Zealand, Singapore and Burma.

By the end of the 19th century, the brand had acquired a solid international reputation, and received a number of awards and gold medals for its polished timepieces at exhibits and international fairs in Paris, Melbourne, Zurich, Amsterdam, London, Chicago, and elsewhere.  With their precision and fine crafting, Baume watches beat records and won competitions in the field of chronometry, including those organized by the Kew Observatory near London. London played an essential role in establishing the global time standard: the Royal Observatory is found there, and the original meridian that was used to determine mean solar time, known as Greenwich Mean Time (GMT)*, runs through it.

Clifton GMT, both elegant and timeless

Baume & Mercier pays homage to this great past with two GMT watches that complete the Clifton men’s collection. These elegant, timeless watches are a demonstration of Baume & Mercier’s ambition to provide travelers with useful functionalities. These luxury timepieces both feature a 43 mm diameter case in brushed satin-finish steel with the date display in the three o’clock position, available with a silvery dial or anthracite dial with sun satin finish.

These models contain an automatic mechanical movement known for its reliability and precision:  ETA 2893-2. With the Dual Time function, it enables the watch to simultaneously display a second time zone, indicated by the red dot at the end of a fine hand that goes around the dial once every 24 hours. This marvel of balance is understated, simple to handle, and useful for everyday use. It is mounted on a black or maroon bracelet fastened by an adjustable triple folding buckle with security catch.

* Since January 1, 1972, Greenwich Mean Time (GMT) has been replaced by Coordinated Universal Time  (UTC), the time standard defined by the combination of a multitude of atomic clocks located all over the world.

The elegant new Clifton GMT model 10111 is a traveler. It was designed for men who regularly roam the planet and who wish to check the time at home, as well as the time where they are. This watch comes in a 43 mm diameter case in brushed satin-finish steel with a shape inspired by that a 1950s Baume & Mercier watch. It contains an automatic mechanical movement visible through the sapphire case back (ETA 2893-2). The slate dial with a sun satin finish is illuminated by a set of golden hands, and shows the date in an open display in the three o’clock position. In addition to the local time, a second time zone is indicated by a fine hand that goes around the dial once every 24 hours. This metropolitan, timeless piece is mounted on a maroon alligator skin bracelet fastened by an adjustable triple folding buckle with security catch.

The understated new Clifton GMT model 10112 has a silvery dial with sun satin finish on its 43 mm diameter case in brushed satin finish steel. It contains an automatic mechanical movement visible through the sapphire case back (ETA 2893-2) enabling the simultaneous display of a second time zone. With the additional feature of a date display in the three o’clock position, this Clifton model is mounted on a black alligator skin bracelet fastened by an adjustable triple folding buckle with security catch. 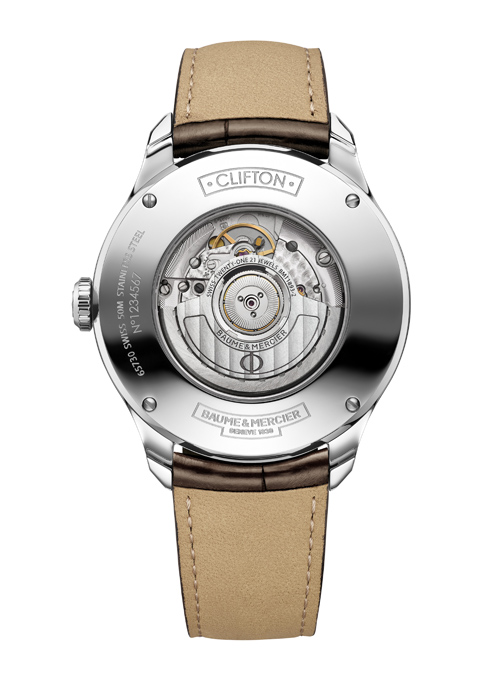 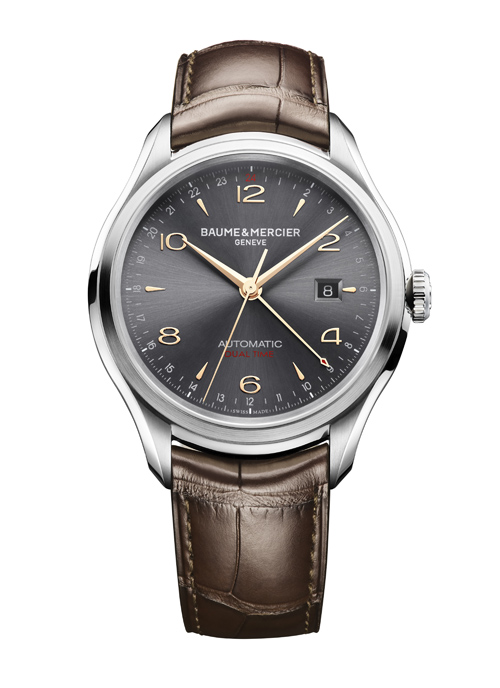 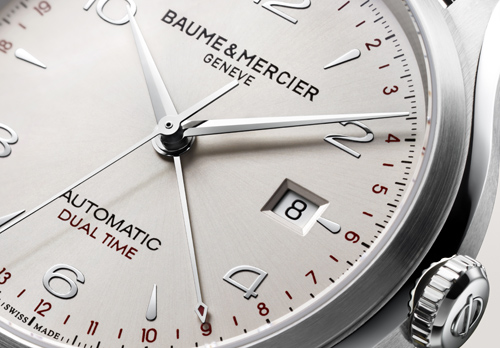 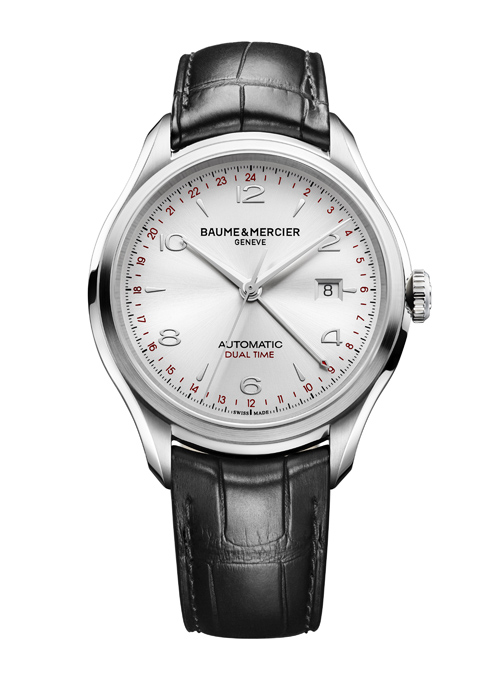