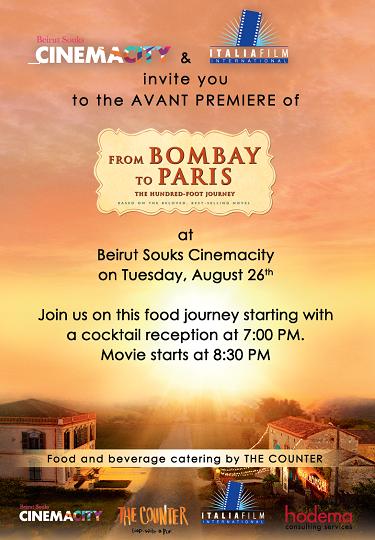 The new movie From Bombay to Paris is all about food and it’s being released next week! The film is also being called The Hundred Foot Journey and the drama romance follows the Kadam family as they clash with Madame Mallory, the proprietress of a celebrated French restaurant after they open their own eatery close by… until some chemistry leads her to take the gifted young chef Hassan under her wing!

We want to send you to the delicious avant premiere of the movie at Beirut Souks Cinemacity on Tuesday August 26! The food journey starts at 7 PM with a cocktail reception by The Counter, followed by the exclusive movie screening at 8:30 PM.

We’re giving away 2 tickets to 10 winners! Just answer the question below and it’s your chance to be there:

Who stars as Madame Mallory in the movie?