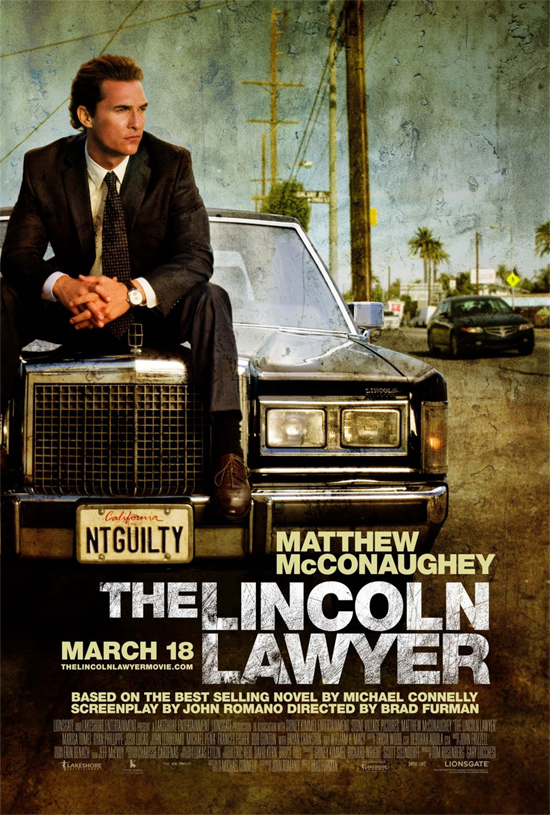 The Lincoln Lawyer directed by Brad Furman (The Take) is a crime, drama, suspense movie based on the best-selling novel The Lincoln Lawyer written by Michael Connelly. Its screenplay is written adapted by John Romano (Nights in Rodanthe) and it stars Matthew McConaughey (How to Lose a Guy in 10 Days), Marisa Tomei (The Wrestler) and Ryan Philippe (Cruel Intentions).

The story revolves around a Los Angeles street-smart criminal defense attorney Mick Haller (McConaughey) who operates out of the back of his Lincoln sedan. He is disliked by many and is accused by his peers of having no conscience because he helps put criminals back on the streets. He is also divorced because his wife Maggie McPherson (Tomei), also an attorney, never liked or accepted the idea of him defending the bad guys. His life changes when he is chosen to handle the case of a high-profile client Louis Roulet (Philippe), a Beverly Hills playboy, who is accused of assault, rape and attempted murder. As the case begins to unfurl, Haller begins discovering certain elements that change the whole dynamics of the movie from one scene to the next. As confusion increases as to who’s really innocent or guilty, threats surface and Haller finds himself in a battle between good and evil, right and wrong. Bound by secrecy, he is unable reveal certain incriminating facts. He realizes that his friends and family are in danger if he does the right thing, whereas if he does the wrong thing, he’d be selling his soul to the devil. What path will Haller choose to take? Find out in this gripping mystery movie.

Matthew McConaughey is sexier than ever with his character’s street-smart, bad boy, “don’t mess with me” attitude. His role doesn’t focus on his sexy appearance, but instead shows us the different emotions he can so skillfully portray.There is great chemistry between him and Marisa Tomei who’s still got that sexy magical aura about her. I can’t really say the same for pretty boy Ryan Philippe who I must say didn’t disappear from the silver screen long enough. I’m glad he played the bad guy/victim role since he has one of those faces you love to hate.

I highly recommend this movie for anyone who likes to sit at the edge of their seats. It’s a must-see for all of you who love courtroom dramas that are filled with intense crime solving and anticipation in every scene.