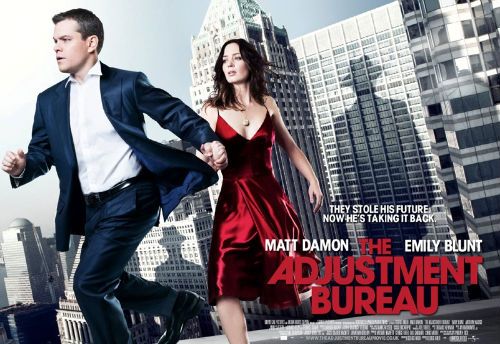 As an eternal Matt Damon fan, I wasn’t the least bit disappointed by his new movie The Adjustment Bureau, written and directed by George Nolfi (The Bourne Ultimatum).

This sci-fi/romance/fantasy story revolves around David Norris (Damon) who is the youngest runner for the U.S. senate. Just as a scandal breaks out and threatens to affect his votes, he accidentally meets Elise (Emily Blunt) and they both feel an incredible chemistry towards each other. She kisses him and disappears. Meeting her inspires him to give a moving speech, and the polls inevitably change in his favor and he wins the seat. Fate never intended for him to meet Emily again, but he did. He is destined to succeed, and the fate of America lies in his hands. The only condition is that he stays away from Emily. But who is making all these rules? David accidentally discovers that “fate” is in fact controlled by a group of people behind the scenes (the adjustment bureau) making sure that everything goes “according to plan”. After the Adjustment Bureau forbid David from contacting or seeing Emily, they continue monitoring him to make sure that he remains on track. For years, David looks for Emily but doesn’t find her until one accidental encounter that brings them together. This time, David won’t let Emily out of his sight, but Emily is a beautiful contemporary ballet dancer, and her career is also threatened by being with David. Their passion for each other teaches everyone a lesson about love, destiny, second chances, and fighting for what you believe in. Will they succeed in fighting fate and stay together or will they choose to stay on their right tracks and focus on their careers?

The chemistry between the two is electrifying, and Matt Damon is brilliant as always. It’s one of those movies that puts a smile on your face and makes you want to call that one person that you have strong feelings for the minute you walk out of the movie theater. The ending catches you by surprise. In fact, every part of the film surprises you because it doesn’t fall into cliché. Although it’s a sci-fi, it’s based on true beliefs but interpreted in a different light; I believe that’s what makes the movie believable and moving.

The Adjustment Bureau will be in cinemas starting March 17.

Have you watched The Adjustment Bureau? What did you think of it?