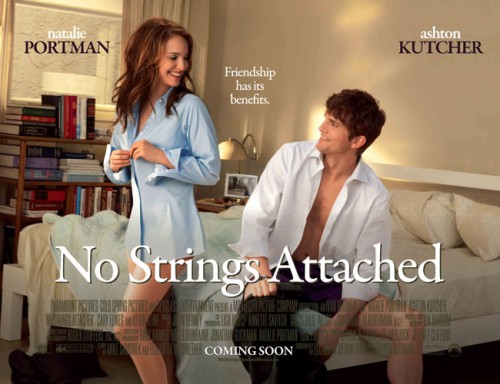 Romantic Comedies are a dime a dozen this season, and one of the latest additions to the long list of romcoms is No Strings Attached starring Ashton Kutcher, Academy Award winner Natalie Portman, and Academy Award winner Kevin Kline. It is directed by Ivan Reitman (Ghostbusters, My Super Ex-Girlfriend) and written by Elizabeth Meriwether and Michael Samonek. The dialogue is smart, fast, funny; and although the movie must include some of the romcom clichés, it shifts things around with the complexity of the main roles to create some spicy moments.

The story revolves around Adam (Ashton Kutcher) and Emma (Natalie Portman); how they met and how their characters and relationship evolved since then. Adam is the popular kid and the son of a famous sitcom star Alvin (Kevin Kline) who divorced his mother and is a free-spirited, careless, but loving father. Emma is a very rational and coldhearted person who does not believe in love and relationships and also doesn’t like revealing her feelings or basing any decisions on her emotions. Adam on the other hand is a bundle of emotions and enjoys being in relationships and falling in love. Adam meets Emma at summer camp when they’re still teenagers and they run into each other again a few years later in college at a frat party where Adam learns that Emma is an MIT med student. They run into each other once more post-graduation while Adam is dating Vanessa, an English bimbo. After Adam and Vanessa break up, Adam is devastated to find out that Vanessa and his father are in a relationship so he gets drunk out of his mind and decides to call every girl on his phonebook until he sleeps with one of them. He wakes up the next morning naked in a strange apartment surrounded by people he doesn’t know and discovers that Emma lives there as well. Did he have sex with any of them? He doesn’t know. His friendship with benefits with Emma begins there, but what happens next?

Watch the movie to see if Emma and Adam end up falling for each other. Does their “relationship” progress from “friends with benefits” to an actual couple? Will Emma ever allow herself to love? Will Adam start wanting more from Emma or will he be satisfied with this sexual agreement?

Enjoy some very heartwarming moments and some hilarious scenes in this smart/sexy/funny movie with two extremely good-looking actors who share a mesmerizing onscreen chemistry. This is not a corny movie that makes you want to vomit; and boys rest assured, this is not a strictly a chick flick. The storyline also sends out a lovely message about love; fighting for each other and sticking around even when the other person seems to be pushing you away. In brief, it tackles the age old question of when fooling around transforms into love.