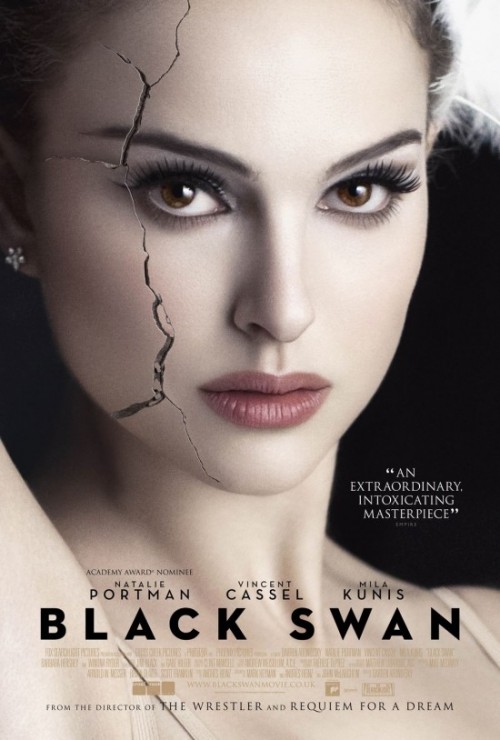 I must say, all that buzz with the SAG award nominations and wins, and the Golden Globe success, and all that flattery and awe from the critics may cloud your vision once you actually watch the Black Swan. Truth of the matter is, with all that hype, it is very difficult to see what a great movie it is; the storyline may seem lame, the filming may seem low budget, and at the end you could leave the movie wondering why there were no sparks, fireworks, and magic.

The Director Darren Aronofsky (The Wrestler) filmed the Black Swan with a muted palette and a grainy style, which gave the movie its artsy effect. There is a lot of focus of the characters bodies and most scenes were shot with a hand-held camera. I believe this technique was perfect for capturing the artistic vibe of the movie and allows us to be more intimate with Portman’s feelings, experiences, thoughts, and predicaments throughout the movie.
Aside to its artistic filming and intriguing storyline, if there was anything truly brilliant about the movie, it is Natalie Portman’s acting! Her character, Nina starts off as so simple as it evolves and erupts throughout the movie. All the actors in the movie had great roles and they played them superbly.

The story revolves around a timid ballet dancer Nina (Natalie Portman) whose dream is to excel and be the best in the prestigious New York company she works for. Her whole life was dedicated to dancing ballet with the help of her overprotective mother (Barbara Hershey) who she still lives with at home. Her relationship with her mother shows the audience that Nina is still very innocent and gullible as her mother still treats her like a 10 year old girl, not allowing her to fully develop and bloom. At the ballet company, talk gets out that the old Swan Queen Beth (Winona Ryder) will be “retiring” against her own will because the company wants a new production and a fresh face for the infamous ballet, Swan Lake. The domineering director Thomas (Vincent Cassal) begins casting for the new Swan Lake, in which the Swan Queen must be both angelic and evil. Nina’s angelic face, poise, attention to detail, and perfect routine make her the ideal candidate to play the White Swan, but her colleague Lily (Mina Kunis) has an attitude that makes her perfect to play the Black Swan. Nina is chosen to play the Swan Queen but she is warned by Thomas that she must “let go”, forget the rules, and allow herself to embrace and transform into the Black Swan or she would be replaced. This challenge proves to be very difficult on Nina, and she undergoes a physical, emotional, and psychological struggle in order to maintain her role as Swan Queen and prove herself worthy and capable of playing both parts. The plot thickens when Lily is chosen as Nina’s replacement, should anything go wrong; and this creates a sense of paranoia and competition in the fragile Nina. The plot thickens as there is a sexual tension created between Nina and Thomas, and as a questionable friendship is formed between Nina and Lily. Nina’s transformation is electrifying as she gets in touch with her bad side as you notice that even her makeup and attitude transform both on and off stage, leaving viewers very intrigued to find out what is truly happening in and out of Nina’s mind.

This is a 1 hr. 50 min psychological thriller that is not be missed; as a viewer, you will be lost in Portman’s character as even you begin questioning reality from imagination.

Have you seen the Black Swan? What did you think about the movie?