Enter To Win Spots to the Immortals 3D Premiere with BNL and Grand Cinemas’! 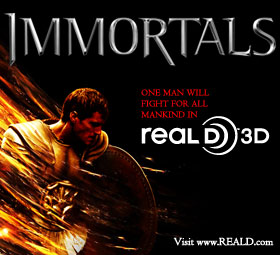 Movie buffs this contest if for you!

BNL and Grand Cinemas’ would like to take you out to the movies.

Immortals 3D the excellent action packed film is coming soon. The film will be released to the public on 10-11-11 but Grand Cinemas’ would like to invite you to a private avant premiere, which will be held on November 10th at Grand Cinema Concorde-Verdun. 5 lucky winners of the BNL/Grand Cinema Contest will be given 2 tickets each to the Immortals 3D premiere. (Don’t worry if you can’t make it to the premiere Grand will extend the tickets for anytime you would like, while the film is running in theaters.)

Enter to win by simply answering the movie trivia questions below.

–       How many Grand Cinemas’ locations does BNL post schedules for under BNL’s cinema section posts.

–       The producers of Immortals 3D also produced what film?

Please note answers will be hidden on the BNL site until it is time to pick the winners.

Newer Post Mosaic Restaurant: The Best is Finally Back!
Older PostBar ThreeSixty: For the Fashionable & Fabulous