Beavis and Butt-Head are Back!

And I don’t think I could be anymore excited. The two and only slacker teen icons are back and dumber than ever…PERFECT! 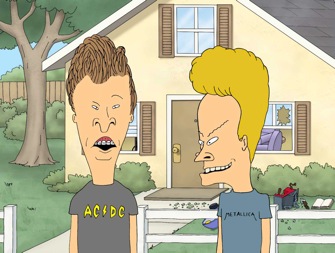 MTV has confirmed the return of “Mike Judge’s Beavis & Butt-Head”.  The two have been bought back to the small screen by creator Mike Judge. Our favorite culture critics are dumber than ever – reality TV, the internet and Ultimate Fighting will all be crossing their TV screen in the all-new season.  “Mike Judge’s Beavis & Butt-Head” will act as the centrepiece of the channel’s highly popular “MTV VIP” programming block, and will premier today, Wednesday 18 April at 23:25 KSA.

In 1993, Mike Judge, the show’s creator, and MTV knocked their heads together and launched a cartoon series starring a couple of lunkheads, and unwittingly started an animated pop culture revolution.  Almost as soon as the slacker teenagers in heavy-metal t-shirts reared their heads, Beavis and Butt-Head became self-appointed arbiters of “cool”.  But, for the most part, they spent their time just sitting on a couch making fun of what they watched on television.

Now “Mike Judge’s Beavis & Butt-Head”, the show that created a cultural dialogue for an entire generation, will make a triumphant return to unleash its hilarious and biting commentary on society, music and pop culture.  Commenting on everything from music videos, reality TV shows like MTV’s “Jersey Shore,” movies, mixed martial arts, viral videos and more. The show will give familiar fans and a whole new audience the chance to laugh at America’s favorite animated dim-witted duo. Ranking as MTV’s top series among M12-34, behind only megahit “Jersey Shore,” “Mike Judge’s Beavis & Butt-Head” doubled the network’s primetime average among M12-34 when it premiered in the US last autumn.