Arnold Schwarzenegger Is BACK . . . To Movies 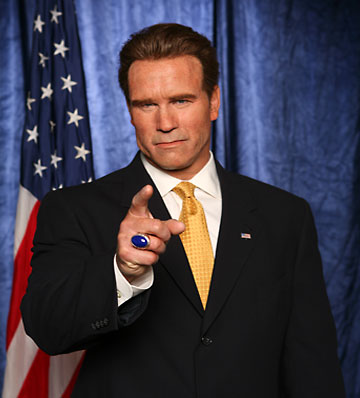 Arnold Schwarzenegger’s eternal phrase, “I’ll be back”, couldn’t be more perfect for his return to movies. He says:

“I’m reading three scripts. One topic/script, which I considered a long time ago before governor, is delighting me particularly. I would play an older [German] soldier, who gets the order at the end of the war to kill a bunch of kids. But he doesn’t do it and gets them to safety at the risk of his life. It has all kinds of adventure. The script is based on a true story.”

“Throwing myself around the room and shooting people is no longer in there, [but] I’m like a sponge that soaks up knowledge and is constantly willing to learn new things.”

So the Schwarzenegger won’t be terminating any lives or throwing any bodies around, but aren’t we all excited to see what direction and approach he’ll be taking with his acting career? I know I’m psyched to see what Arnold’s comeback has in store for us. Are you?