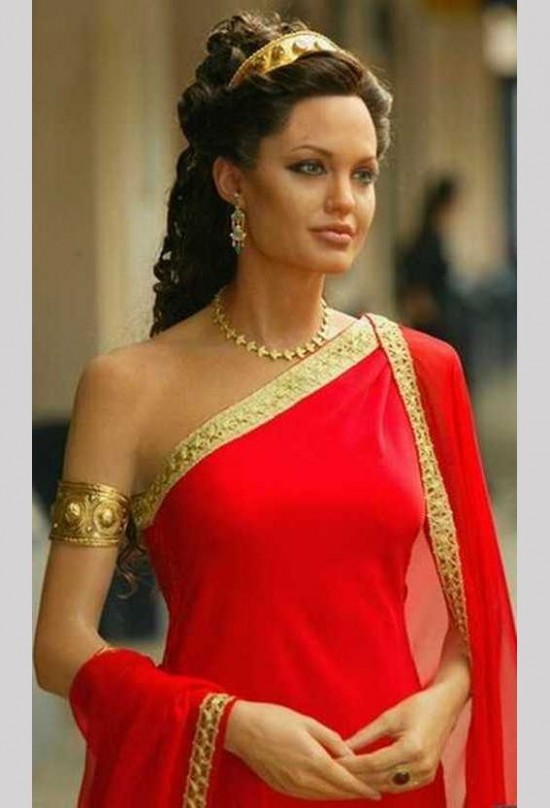 Through this film, Angelina Jolie wants to destroy and change the bad reputation of “Cleopatra” Queen of Egypt, which have been considered as a sex symbol, the actual fact is not like that. Film about the incident at the time of Pharaoh, Egypt, will tell about the good side of the queen.
As Cleopatra, actress  Angelina Jolie who is now 35 years old, said that Cleopatara not like that, she is actually a legendary symbol of a leader, powerful at the time of the ancient Egyptians.

This figure for the Queen has been misunderstood, the figure of Cleopatra was not as bad as in described, says Angelina. Cleopatra’s character is not really telling about the life of glamour.  After Angelina Jolie  reads more about Queen Cleopatra, turns out she was a very strong mother, loving mother of children and faithful servants of the empire. Queen Cleopatra speaks five languages and she was a leader with character.

The movie “Cleopatra” lifted from the story rewritten by David Fincher. The movie will be released in 2013, as well as to commemorate the 50th anniversary of the movie “Cleopatra”. “Cleopatra” in the classic version was aired in 1963. In the film, the character of Cleopatra was played by Elizabeth Taylor deceased.

Angelina Jolie says that the film version will be more powerful than ever before depicted by Elizabeth. But she also praised that Elizabeth as Cleopatra look good with black hair. According to her, Elizabeth Taylor has managed to perfectly portray of Cleopatra.

Angelina Jolie says that her appearance in the Cleopatra may never be as lovely as Elizabeth Taylor.  But Angelina will try to get into a different truth about Cleopatra. Here will be more likely to say Cloepatra as pharaoh in history and not as a sex symbol, because she does not like it.  The “Salt” movie Actress adds that Cleopatra is an attractive woman but she is not pretty remarkable. News about Cleopatra is having many lovers, Angelina did not really, Cleopatra only had two lovers namely Julius Caesar and Marc Anthony. Additionally, Cleopatra only married twice with her brother but killed each of them. Angelina Jolie as  “Cleopatra” Queen of Egypt , This could be an amazing movie, but also tragic!.

Newer Post Beirut is in the eye of the Beholder: The Building Block Foundation of Fashion
Older PostCristiano Ronaldo’s girlfriend Irina Shayk strips off for Valentine’s Day lingerie shoot