Top 5 Sexiest Motorcycles of All Time

Here is a list of the top 5 sexiest motor bikes of all time according to www.visordown.com. This list is not definitive and definitely not about the price or the performance.. It’s all about the feeling it gives you.. 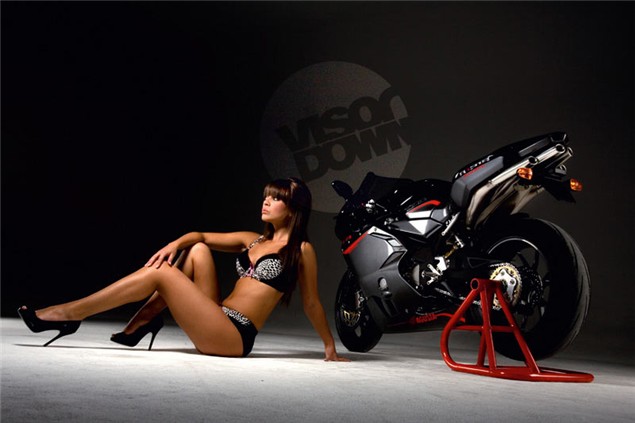 If power is the ultimate aphrodisiac, then MV Agusta’s F4CC is the planet’s most sexually charged motorcycle. Not simply because of its sheer horsepower; a claimed 200bhp with the titanium race exhaust in place. Nor because only 100 units will be built, at €100,000 apiece. (The only one in this country costs £75,350 on the road — and you did read that correctly.)

No, the CC’s real power is in its name. The CC stands for Claudio Castiglioni, MV’s President. They could just as easily be for Capo dei Capi, the Mafia term for boss of bosses. “I put my name to this motorcycle because I originally dreamed of it for myself,” says Castiglioni. It is created to be the ultimate F4; an unashamedly self-indulgent, money-no-object version of the radial 16-valve four on which the famous Italian (alright, Italian-American) marque was reborn.

As befits the Capo’s Creation, the CC is faster even than the F4 Ago; more intricately detailed even than the F4 Tamburini. Its 1078cc engine is tuned with titanium internals and variable intakes, and lightened with magnesium covers. The chassis combines magnesium frame sections and swing-arm with carbon bodywork plus unique, hand-machined components. Another famous saying is that absolute power corrupts absolutely. Clearly that is sometimes a very good thing. 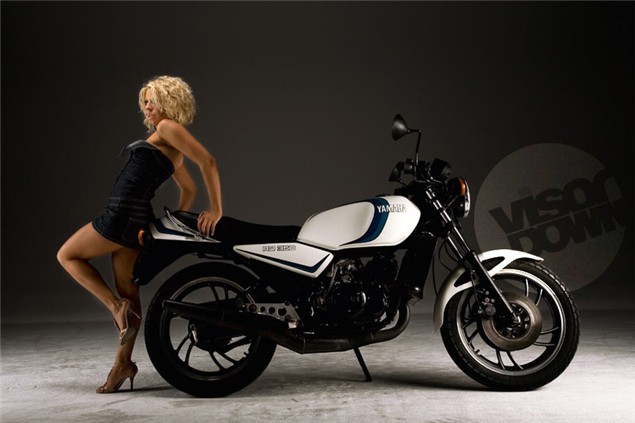 If bikes such as the Desmosedici and RC30 are motorcycling’s supermodels, then the RD350LC is the saucy sixth-former that all the boys fancied at school — and it’s no less appealing for that. In the early Eighties there was nothing on wheels that matched the Elsie’s blend of clean good looks, razor-sharp performance, racetrack cred and down-to-earth price. This was the blonde bombshell that teenaged leather-jackets could take home to meet the folks — and which was a total blast to ride.

Despite its humble status the LC had class in its genes. The liquid-cooled two-stroke twin was descended not only from Yamaha’s line of superb aircooled roadsters such as the RD350 and RD400, but also from the all-conquering liquid-cooled TZ350 and 250 racers. Adding the water jacket to the RD’s cylinders allowed Yamaha to boost output to 47bhp, good for 110mph with a thrilling kick as the power came in with an orgasmic six-grand shriek.

The simple but attractive styling matched the shapely tank, seat and sidepanels with eye-catching curved spokes, plus black engine and pipes. Competent forks, a cantilever monoshock rear end and sharp twin-disc front brake combined with light weight to make the Yam ace in the bends. It was the ultimate poor boy’s superbike; the star of a million teenage fantasies. 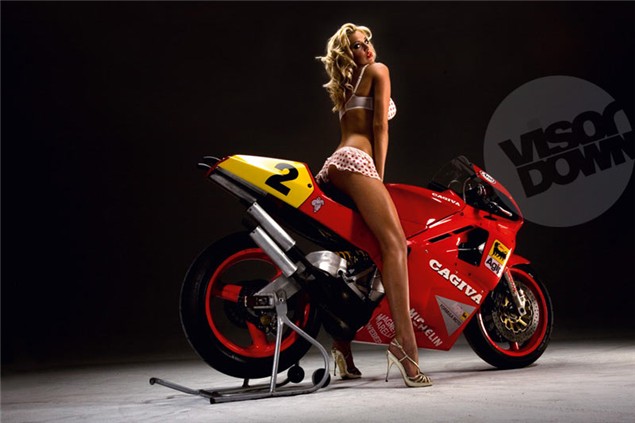 One of the most vivid images from 500cc grand prix racing in the late Eighties was of Randy Mamola power-sliding his factory Cagiva sideways out of a bend with smoke pouring off its rear slick. Randy managed only one podium finish aboard the Cagiva, and couldn’t approach the four championship runner-up spots he’d managed for Suzuki, Honda and Yamaha. But the tiny Italian factory’s efforts to beat the Japanese giants in racing’s toughest class were truly heroic.

Cagiva’s creation might not have been the fastest of the 500cc brat-pack, but it was surely the most deliciously sleek and streamlined. There was plenty of high tech beneath its all-enveloping bodywork, too. The 498cc liquid-cooled V4 used contra-rotating twin crankshafts, and produced about 150bhp. The twin-spar aluminium frame and banana swinger were Cagiva’s own; suspension was Marzocchi and Öhlins’ finest.

Cagiva’s growing GP challenge saw race wins for Eddie Lawson and John Kocinski in the Nineties. Kocinski even led the ’94 championship before cash problems forced Claudio Castiglioni to abandon his dream. More recent rumours that Cagiva would produce a limited-edition replica for track-day or collector use have faded. But the red bike that Randy rode remains a stunning memento of one of racing’s most inspiring struggles. 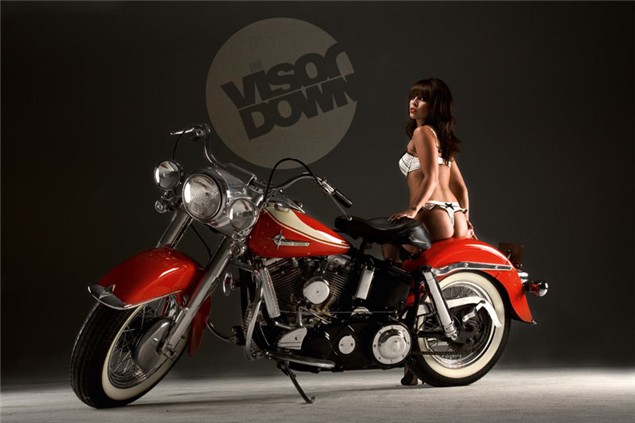 It’s no wonder that Harley has forged such a successful business by faithfully copying the look of its greatest hits from the Fifties and beyond. One glance at this immaculately preserved Duo-Glide confirms the pulse-quickening, gut-churning appeal of a big, aircooled 45-degree V-twin engine, housed in a long, laid-back cruising machine with cow-horn bars, swoopy fenders, buddy seat, lashings of chrome and a gas tank shape just so.

Especially when it’s all wrapped up with a technical advance that made the FLH Duo-Glide, released in 1958, one of Milwaukee’s most significant machines. Eight years earlier, the Model EL had introduced Hydra-Glide telescopic suspension to Harley’s range. Now the 74ci (1208cc) V-twin gained hydraulically damped rear shocks, adding considerably to the comfort of a bike whose 52bhp output gave genuine ton-up performance.

“Now! The Greatest Motorcycle ever built,” trumpeted Harley’s advertising back in 1958. “New swinging-arm suspension combines with Hydra-Glide front fork and spring-loaded seat post to make the Duo-Glide a miracle ride.” A trifle immodest, perhaps. But half a century later, the fact that the Duo-Glide’s visually near-identical descendents are some of the most desirable bikes on the planet suggests that — in terms of lasting sex appeal, at least — it really was The Greatest.

Life in the fast lane was transformed when the GSX-R750 exploded onto the scene in 1985. Tall, slim and with those two round headlights set in a shapely full fairing just like Suzuki’s works endurance racers, the outrageously light and fit GSX-R made every rival seem like a fat bird with acne. Suzuki’s engineers had simply redefined what was possible from a mass-produced motorcycle. 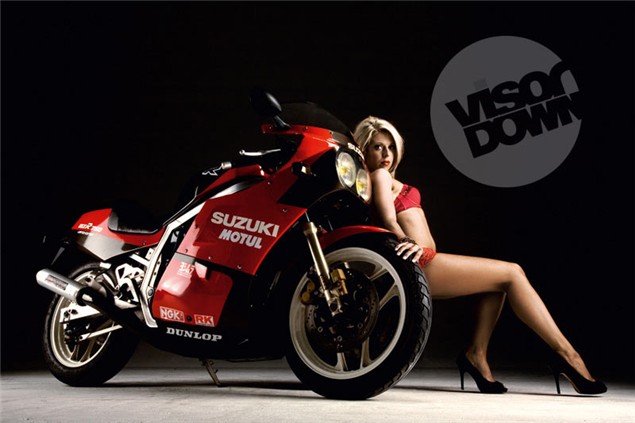 The GSX-R’s revolutionary aluminium frame weighed less than half as much as the steel equivalent of its GSX750 predecessor. Foam-backed instruments, slender 18-inch wheels, and the oilcooled motor’s magnesium cam-cover contributed to an all-up weight of 176kg, over 30kg down on Yamaha’s new FZ750. But Suzuki’s superstar didn’t crush the opposition just by dieting; it was powerful as hell too. The 16-valve four made 100bhp, coming alive at 7000rpm to send the bike tonking to over 145mph.

Straight out of the crate, the GSX-R was in a different league to most rival streetbikes, and ridiculously competitive on track. Hotted-up with flat-slide carbs and a loud four-into-one, it was faster, louder and sexier still. The Gixxer cult was born; high-performance motorcycle design entered a new era. More than two decades later, the reputation of the bike that started it all is stronger than ever.

Which is your favorite… Of course we mean bike!
Source: http://www.visordown.com/