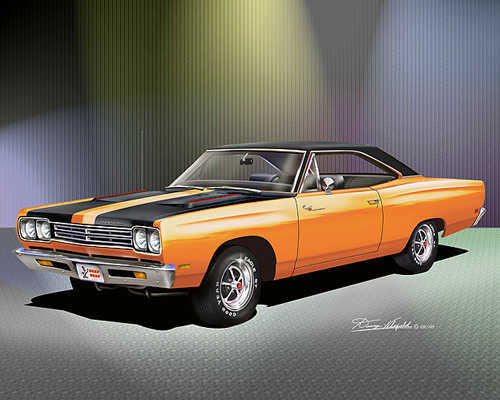 Named for the Warner Brothers cartoon character that was always frustrating Wile E. Coyote, there’s nothing comical about Stanton’s original, 44,000-mile coupe other than the “meep, meep” horn and some side badges with an image of the bird. It’s a serious, no-frills “muscle car” built in various forms between 1968 and 1980. While the interior is austere, with rubber floor mats and a bench seat, the “4TWENTY6” license plate on Stanton’s bright red coupe says it all.

Under the hood is the vaunted and potent 426-cubic-inch “Hemi” V-8, pumping out 425 horsepower and 490 pound-feet of torque. “The Road Runner of 1968-1970 was based on the Belvedere,” Stanton says. “Combined with low weight, the six-passenger Road Runner could run the quarter mile in 13.5 seconds at 105 miles per hour. It would prove to be one of the best engines of the muscle car era.” This model was so highly regarded that it was Motor Trend magazine’s “Car of the Year” for 1969 and sales almost doubled to more than 80,000. It remains one of today’s most collectible muscle cars.