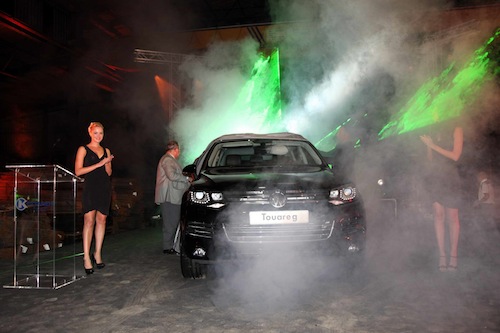 The latest edition of the Volkswagen Touareg 2011 model was unveiled by ETS. F.A Kettaneh S.A, in a remarkable night at DemcoSteel warehouse. Attendees of the event were treated to a glorious night where the pioneering Touareg was launched in a spectacular ceremony, followed by a night filled with entertainment.

The venue was transformed into an exhilarating display of special effect lighting, and was taken over by misty smoke, that inundated the place creating a breath-taking ambiance. As the unveiling of the Volkswagen Touareg draw nearer, an endowed violinist and a local’s favorite, Tony Sleiman, hyped up the crowds with his rhythmic beats.

The much anticipated and technologically advanced Touareg was then debuted while LCD Projectors demonstrated the car in action. Guests were given the opportunity to book their place to test drive the 4×4 and experience its smooth and comfortable driving.

With characteristics that will prove popular with Middle East customers, the new era Touareg is longer, lighter, sleeker, safer, and roomier than its predecessor. Now weighing 208 kilograms less than before, the nimble new Touareg manages to attain 1,642 litres of cargo space despite its improved aerodynamic design, and large variety of new assistance and safety systems. 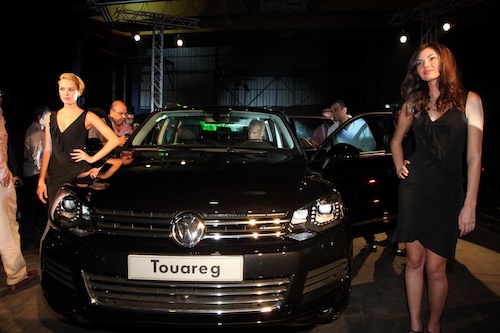 Mr. Nabil Kettaneh, Chairman of the board/CEO of ETS. F.A. Kettaneh S.A, expressed: “The new Touareg gives you the luxurious sense of individual freedom, even in everyday motoring. It has class, it has power, and it has spirit. It is the car of the future, which will surpass your expectations”.

At the unveiling of the new Touareg, Stefan Mecha, Managing Director of Volkswagen Middle East, said “About 500,000 drivers chose to buy the first generation of the Touareg worldwide, and it quickly established itself as our flagship vehicle in the region after its Middle East debut in 2003.”

“Seven years later, the new Touareg has taken its winning concept into the future and heralds a paradigm shift in the idea behind multipurpose SUVs. This, combined with the Touareg’s existing popularity, has generated overwhelming interest already. “With its combination of stunning looks, world first innovations, and environmentally friendly economical technologies, the new Touareg is sure to become the new champion amongst SUVs in the region.”

The new Touareg also boasts a range of engines that are nearly 20 percent more fuel efficient, and is the first and only SUV of European origin to be available in a hybrid version.