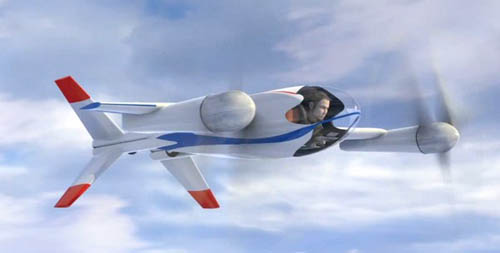 The engineers at NASA have combined every future thought of transportations into a single little vehicle called the ‘Puffin‘. It takes off like a helicopter and flies like a plane. It can cruise at 140 mph and, with a boost mode, hit about twice that. Oh — and it’s electric.

The tilt-rotor Puffin has a flight system similar to the V-22 Osprey, but instead of carrying a bunch of Marines and their gear, the Puffin carries one person in the prone position. The rotors are nearly 7.5 feet in diameter and the aircraft has a wingspan just over 13 feet.  The Puffin weighs in at less than 400 pounds including the lithium phosphate batteries, as it is made of carbon composite construction and works on electricity.

The Puffin is designed to stand on its tail, which serves as the landing gear. Once the Puffin transitions to horizontal flight, the pilot can cruise at more than 140 miles per hour and 300mph in the boost mode. NASA says it should be able to climb under full power to around 30,000 feet before the battery pack would be depleted enough to require coming back down.

No exact date on when the Puffin will make its first manned flight, though NASA plans to finish a one-third size demonstrator by March 2011 and evaluate its transitions from cruising to hovering.