McLaren P1TM makes its debut in the Middle East 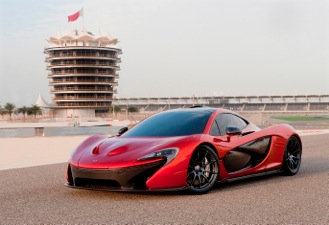 The McLaren P1TM, the next generation ultimate supercar from McLaren, has made its Middle East debut at a special unveiling in Manama, Bahrain. Privileged guests of McLaren Automotive, its majority shareholder, Mumtalakat, and its retail partner in the Kingdoms of Bahrain and Saudi Arabia, Al Ghassan Motors, were given a unique overview of the car by Paul Mackenzie, McLaren P1™ Project Director.

Mackenzie said: “This unique car is designed with one aim in mind: to be the best driver’s car in the world on road and track. With our history of making ground-breaking sports cars such as the McLaren F1, the SLR and more recently, the 12C and 12C Spider, the McLaren P1™is rightly anticipated as one of the decade’s most exciting cars. It is both a combination of McLaren’s 50 years of racing and road car heritage and our shareholders’ vision for the future of our performance car business.”

McLaren Automotive Regional Director for the Middle East & Africa, Mark Harrison added: “The McLaren P1™is set to be the most exciting, most capable, most technologically advanced and most dynamically accomplished supercar ever made: this is the challenge we have set our development engineers before committing the car to production.  The arrival of this design study in Bahrain is generating huge excitement and we have a very strong initial order bank in the Middle East despite the fact we have not yet confirmed the car for production.”

Sheikh Ghassan A H Al Sulaiman, President and CEO, Al Ghassan Motors, said: “This is a genuinely once in a lifetime opportunity for a passionate sports car retailer like Al Ghassan Motors. To launch the spiritual successor to the McLaren F1 is a key reason why we partnered with McLaren. Our customers and teams at our Bahrain and Saudi Arabia businesses cannot wait for this car to be confirmed and production to begin: I believe we have the most passionate sports car fans in the world in this region and this car will genuinely set their pulses racing.”

The McLaren P1TM presented at the high profile event was a design study, but confirmation of the limited edition supercar is anticipated in the coming weeks, with production set to be established in 2014.

The new model was designed from the outset to prioritise aerodynamic performance, and has benefited from the same testing technologies used on McLaren’s Formula 1 cars. It has much higher levels of downforce than any current road car – 600kg is achieved well below maximum speed, and is similar to current sports racing cars.

As with the legendary McLaren F1 road car, the McLaren P1TM is a mid-engine design that uses a carbon fibre monocoque and roof structure safety cage concept called the MonoCage, which is a development of the MonoCell used in the current 12C and 12C Spider. All the body panels are carbon fibre to reduce weight.

Displaying a compact, fluid, yet thoroughly unique design, the McLaren P1TM adheres to the company’s philosophy of everything being done for a reason. Neat touches abound, such as the gold leaf heat shield around the exhausts – gold being the ideal metal to reflect heat; or the glasshouse that was inspired by the canopies of fighter jets, and which gives occupants similar sensations to a pilot as well as levels of visibility that are exceptional for a supercar.

While every single body panel, air intake and air exhaust is designed to optimize aerodynamics, the most noticeable feature is the large, automatically-adjustable rear wing. It can extend rearwards by up to 300mm on a racetrack and by up to 120mm on the road, and has been developed using McLaren Formula 1 processes and software. The McLaren P1TM also has a DRS (drag reduction system) function, just like a Grand Prix car, to reduce downforce and increase straight line speed.

The McLaren P1TM follows in the footsteps of the classic McLaren F1 as the ‘ultimate car’ offering. The name ties in with Grand Prix racing. P1 means first place – and McLaren has won 182 Grands Prix since its debut in 1966, more than any other Formula 1 team. There is also heritage in the name: the McLaren F1 was initially known as Project 1, or P1.

Twenty years ago the McLaren F1 raised the supercar performance bar at its launch, and it is still regarded by many, especially those who have driven and owned one of the road car versions, as the greatest supercar ever to touch tarmac.

The McLaren F1 was the first road car to be based on a carbon fibre chassis: a technology that McLaren introduced into Formula 1 in 1981, and one that was rapidly adopted by all Formula 1 teams. At 243 mph / 391 km/h, it was the world’s fastest production car; it remains the world’s fastest naturally aspirated (non-turbo) production car, a record likely never to be beaten. The racing car version of the F1, the GTR, won the famous 24hr Le Mans road race on its debut in 1995: another feat that will likely never again be achieved by a racing car version of a road car.

With the McLaren P1 TM, the goal is to take the achievements of the McLaren F1 as inspiration and redefine the criteria by which supercars are judged.

Newer Post Lady Gaga accused of ‘forcing her personal assistant to sleep with her’
Older PostBeirutNightLife.com Brings You the Official Lebanese Top 20 the Week of February 3rd, 2013!