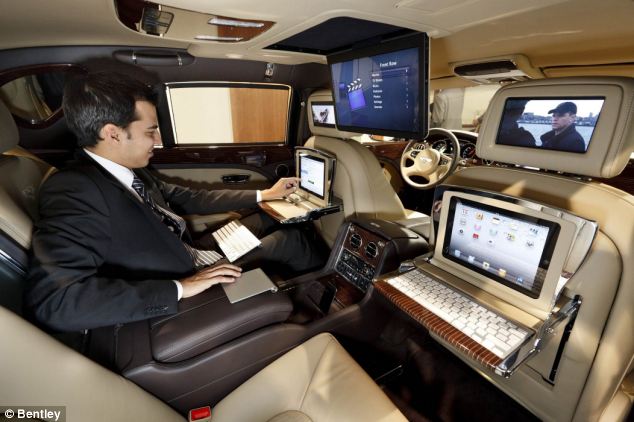 If you can’t bear to be away from the office then this luxury car might be the answer – by keeping you working on the move.

The Bentley Mulsanne Executive Interior Concept is a fully operational mobile business suite which means that even traffic won’t hold you up.

It has in-built Wi-Fi, three TVs and two docking stations with wireless keyboards that iPads can slot into.

A Mac Mini sits in a ‘bespoke boot drawer’ coordinating all the electronics, and there is an iPod which can play music and acts as the remote control for the entertainment system.

Just like the executive car of old there is also a telephone, which is inside the armrest.

The Mulsanne is aimed at executives who need to be connected even during long commutes and cannot afford to waste time.
Bentley has not released the price of the concept yet, but the normal version cost £202,000 ($325,000).

According to the specifications, the main TV is a 15.6-inch high definition screen whilst the smaller TV sit in the back of the front headrests.

There are electric powered wood veneer picnic tables that drop from the backs of the front seats which have the iPad workstations on them, including a Bluetooth wireless keyboard.
The Mac Mini has 20GB of storage space for films and music which is broadcast through a 200W, custom 20 speaker system.

The satellite navigation is state of the art and has voice zip code recognition – plus those in the back can put in new destinations too.

Among the other features are slots in the seats for the wireless keyboard when you are not working, a rear view camera and an iPod dock on the armrest.

There are task lights and vanity mirrors which mean you can check your appearance before Skyping.

There is even a cooler and something that might come in handy if the electrics pack up – a special Tibaldi pen.

Whilst clearly aimed at the luxury market, for those willing to pay for the Mulsanne it could help them significantly improve their productivity.
Source: http://www.dailymail.co.uk

Newer Post Wendy Williams, 48, is the latest star to strip naked for PETA
Older PostBest of Beirut (Part 2): The Rise of Gemmayzeh