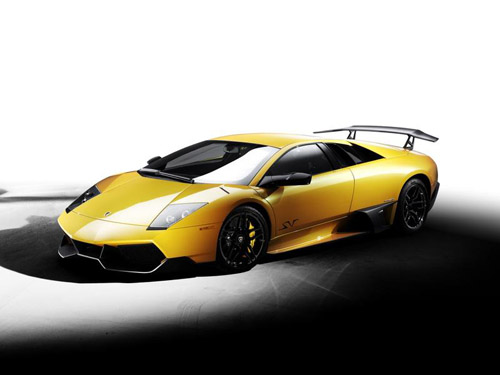 It costs about $450,000 and delivers a monstrous 670 hp, but the meanest Lamborghini since the legendary Miura SV must do without such modern conveniences as direct injection, a dual-clutch transmission, bixenon adaptive headlights, active differentials, a starter button, a radio, and stability control. Lamborghini engineers even considered eliminating four-wheel drive, which would have shaved another hundred pounds off the grand total. But in the end, they refrained from creating an even more radical rear-wheel-drive Murciélago, which might have made the 42/58 percent weight distribution unwieldy in the wet. 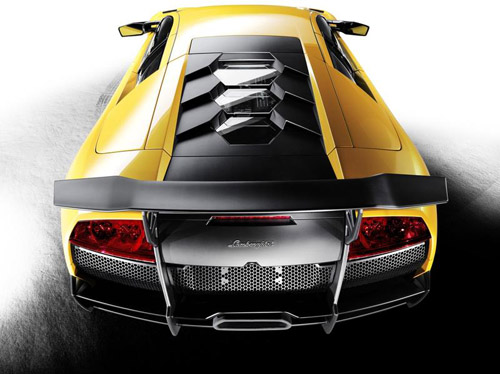 Even with all-wheel drive, the Murciélago LP670-4 SuperVeloce’s rear-biased torque split lights up the rear tires with stability-threatening urgency. The only available electronic antidote is traction control, which cuts in too early and hangs in longer than necessary. You can switch it off, but if you do, be prepared, because the Murciélago fights the road, the driver, and its own idiosyncrasies in one of the noisiest, angriest, and most expressive supercar performances ever.

Although the 3604-pound SV undercuts the stock Murciélago LP640-4 by 220 pounds, it is by no means a Spartan track-day special. Quite the contrary: the suede-and-leather-trimmed cockpit looks almost as lavish as the one in the silly-money Reventón. The one-size-fits-some carbon-fiber bucket seats feature contrasting bright orange accents as well as substantial six-point shoulder harnesses, the nav screen doubles as a monitor for the useful rearview camera, and you can choose between manual or automated E-gear transmissions at no extra cost. You also get a front-axle lift system to protect the low-slung nose and a Corsa button that triggers launch control or particularly aggressive throttle and damper settings. Unique to the SuperVeloce are a rear diffuser that some F1 teams would kill for; the world’s biggest exhaust outlet; larger rear brake-cooling ducts; a new engine cover made of hexagonal polycarbonate panes inspired by the wild, huge-windowed 1967 Marzal show car; and, of course, an outrageous rear wing.

To lose weight, Lamborghini fitted a redesigned exhaust that alone is 57 pounds lighter. The new seats, the absence of a stereo, and a carbon-fiber center console remove another 75 pounds. Replacing the motorized rear wing with a fixed version saves 29 more pounds. Mainly through material substitution and lightweight construction, the engine, gearbox, and differential lost a combined 73 pounds. Despite heavier-gauge steel, the stiffer tubular spaceframe is now 44 pounds lighter than before. The more efficient wheel design, a smaller-diameter clutch, composite floor panels, and less sound-deadening material also cut weight. Partially offsetting all these efforts, underbody reinforcements, bigger brakes, and a beefed-up transmission add more muscle to the bones. 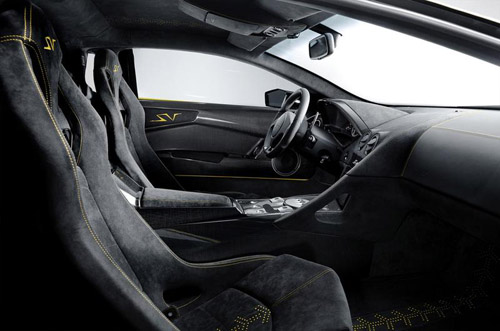 To emphasize the SV’s weight advantage, engineers found an extra 30 hp by tweaking intake manifolds and valve timing. The 661-hp, 6.5-liter SV unit marks the most powerful iteration of the legendary V-12 that dates to a Giotto Bizzarrini design from the early 1960s. The 60-degree, quad-cam V-12 needs high revs to deliver. The torque curve peaks at 6500 rpm, and maximum power arrives at 8000 rpm, at which point you have about 300 rpm before the limiter finally cuts in.

Still, if a Murciélago SV is ever overtaken while accelerating flat out from 0 to 62 mph, the other car is likely to be a Bugatti Veyron, which does the run in 2.5 seconds versus Lamborghini’s still-incredible claim of 3.2 seconds for the SV (the stock Murciélago coupe is rated at 3.4 seconds). Predictably, fuel economy is an oxymoron: our test car averaged 9 mpg. But that’s beside the point. After all, the SuperVeloce is a very special vehicle for very special occasions, like your favorite stretch of country road on Sunday at 5 a.m., your favorite show-off boulevard on Saturday at 5 p.m., or your favorite expressway when the conditions are right.

The SV offers a little more speed, a lot more presence, and an even more riveting driving experience than the stock Murciélago coupe, albeit at a $96,000 premium. The Lambo is more sympathetic and confidence-inspiring than the cool but cold, total-efficiency attitude that seems to be the rule in more modern and admittedly more complete machines. But it’s refreshing to be at the helm of a proper hard-core sports car that isn’t littered with omnipresent liability warning stickers, six or seven air bags, and even more electronic safety nets. Just about the only truly up-to-date trait the SuperVeloce conveys is build quality that meets the high standards of Audi, which owns Lamborghini. We can live with that as we await the next variation of the Murciélago theme, which may well be the Reventón roadster that the rumor mill is predicting for this September’s Frankfurt auto show. 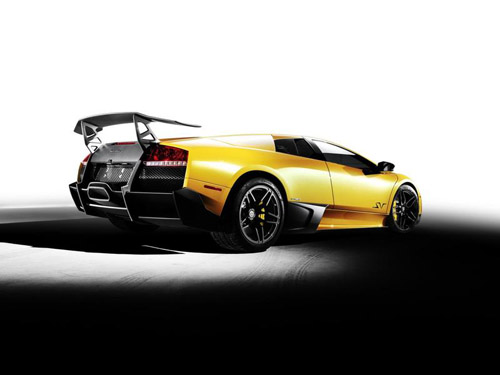