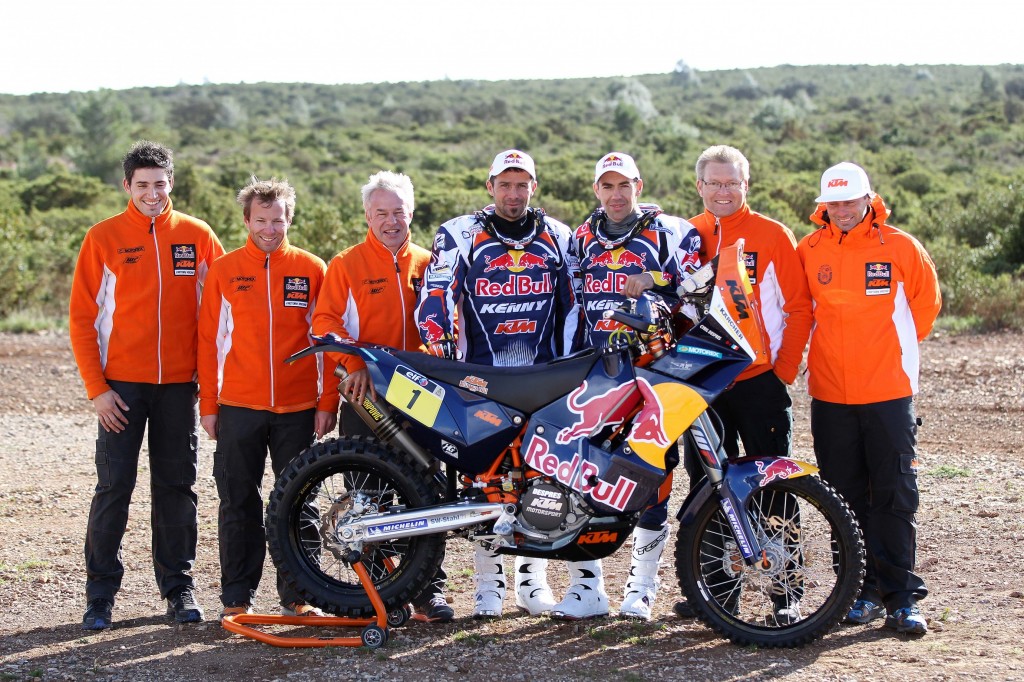 KTM goes to the Dakar 2013 as the hot favourites for the title with dueling co-stars of the official factory team, Cyril Despres of France and Spaniard Marc Coma “Ready to Race” in typical KTM style. Together these riders, collectively considered to be the best in the world, have taken seven consecutive titles.

Less than one month before the rally begins (January 5, 2013 in Lima, Peru), equipment has been shipped from Le Havre and the countdown to what is one of KTM’s most important challenges has begun. Cyril Despres and Marc Coma, who last year were only minutes apart in collective times after 15 days and more than 8,000 km of the world’s most challenging terrain, are as hungry for the coveted trophy as ever before. Together they have created an amazing chapter of rally history and the fact that they have won on alternate years from 2005 to 2012 means it is up to Coma to keep the stats orderly in 2013.

KTM has won the Dakar Rally every year since its breakthrough year in 2001, another statistic that sets the factory team from Austria up as the most hunted in the history of this epic race. It is no secret that opposition teams and riders are going all out to topple the domination of the KTM riders but Coma, who again won the World Cross Country Championship title in 2012 and Despres who played his cards close to his chest but still dominated in the events he entered, like the Desafio Littoral and the recent Morocco Rally, are both in peak form. They will be riding the KTM 450 Rally factory bike.

Despres and Coma will again be supported by their now traditional “water carriers”, Ruben Faria of Portugal and Juan Pedrero of Spain, while this year KTM will also field a Factory “B” Team made up of South African duo Darryl Curtis and Riaan van Niekerk, who are joined by Poland’s rising star rally personality Jakub ‘Kuba’ Przgonski.

KTM will also be at the Dakar with all that is necessary in equipment, spares and expertise to support privateers who have signed up for the full KTM Customer Service package. This year they number 36 and for many it is the adventure of a lifetime that takes them on a north-south direction from Lima, Peru to the Chilean capital of Santiago. For KTM it is a mammoth logistical task to provide the factory teams, supported riders and customers with everything they need to ensure they all get the most out of the 8,300 km epic journey that traverses Peru, Argentina and Chile in 13 challenging stages.

The Dakar Rally is not only one of the most important events on the KTM racing calendar; it is the ultimate test of man and machine, man against nature and an immense physical and psychological test for the world’s best riders. They will be called upon to endure 15 days of hard riding at breakneck speeds. They will traverse South America’s notorious coastal desert, including the Atacama, known to be the driest place on the planet and they will even cross the mighty Andes before arriving at the finish line in Santiago. Every rider who completes this epic trip is a hero, but there is only one winner and the name of that rider will be revealed in the Chilean capital on January 20, 2013. It is now up to the KTM factory riders to try to maintain the team’s perfect record and add yet another year onto the record books.