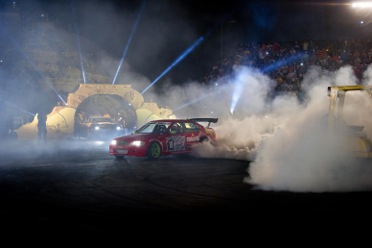 Another exciting season of Red Bull Car Park Drift comes to an end with the crowning Jordanian Mohammed Kukhun “King of Drift” for the Middle East, in a mind blowing Finale held in the Dead Sea on Friday where thousands of Jordanian and Arab fans gathered to watch a heated competition.

Sponsored by Chevrolet, Red Bull Car Park Drift gave a new meaning to this exciting sport through the concept of safe driving as well as the special tinge added this year. The championship was held under the auspices of Engineer Amir Al Bashir, Deputy of Prince Faisal Bin Al Hussein of Jordan Motorsport, and included amazing shows that spiced up the thrill following a spectacular opening ceremony.

The event witnessed a fierce competition and extremely high driving skills, reflecting a remarkable evolution of drift disciplines in the region and making the decision hard as to electing a winner. Kukhun offered breathtaking shows, thus earning the title at the final round with the highest score assigned by the jury panel. Egyptian Rami Serri came in second position followed by Lebanese Jad Himo in third position.

The jury consisted of Red Bull athlete Abdulaziz Turki Al Faisal, New Zealand’s renowned pilot Mad Mike, founder of “U” magazine Shirene Rifai, and Ihab Bate from “Jordan Motorsport”. The judging process was based on the art of drift as a major criterion, i.e. turning techniques with hand brakes and special skills; in addition to engine roaring and tire smoke, audience acclaim, and car appearance.

“Last night, the excitement and suspense hit unprecedented levels in the history of the competition”, said Alberto Chahoud, Regional Communication Manager for Red Bull. “We are thrilled to have offered motorsports fans a competition that gave drifting a totally new meaning”. Chahoud thanked Jordan Motorsport for their support, as well as Chevrolet and the other sponsors; he didn’t forget to pay a special tribute to the press for their great coverage of the event.

The crowned King of Drift expressed his great happiness and pride to honor his country at the regional finals. He also praised the outstanding organization of the event and suggested to “organize several events of this kind, allowing motorsports lovers to demonstrate their skills safely”. Abdo Feghali who took in charge the technical aspects of the competition also pinpointed the same saying that “Red Bull Car Park Drift was once again a unique opportunity for Arab pilots to gather and compete in a special and professional environment, thus promoting for safe driving”.

An amazing Royal Jordanian Falcon show festooned the Dead Sea skies at the opening ceremony announced the beginning of the action side of the event. In addition, Turkish rally female pilot Burcu Cetinkaya and New Zealander Mad Mike entertained the public with great and unique drifting shows, while “Autostrade” the local musical band added some funky notes to the event.