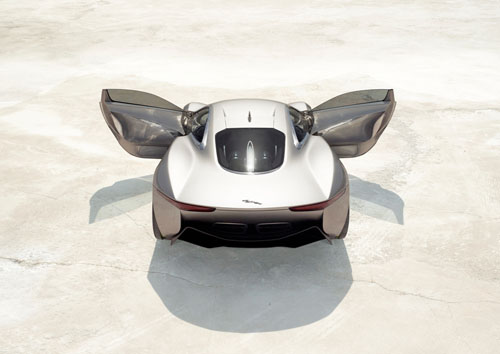 Jaguar has revealed a stunning range-extended electric supercar concept car. The C-X75 has been designed to celebrate 75 years of the marque and provide a glimpse into the future of Jaguar and its commitment to producing beautiful, fast cars powered by sustainable means. “The C-X75 is a tribute to the people who shaped the iconic Jaguars that are revered to this day. By making it an innovative test-bed for the technologies of tomorrow, it also ensures that our reputation for engineering excellence will continue for another 75 years and beyond.”

The C-X75 hints at an exciting evolution of Jaguar’s design language while paying homage to some of its most admired cars of years gone by. Advanced design features such as a ground-breaking propulsion system and active aerodynamics allow for an elegantly simple fuselage section that remains stable at very high speeds.

The C-X75 is finished in Jetstream Silver, its designers staying true to the long-held Jaguar design philosophy of natural, flowing lines and simple, elegant forms. Where inspiration from the past was found is in the innovative engineering and functional design elements of cars like the 1950s C-Type and D-Type racers and unique 1966 XJ13 Le Mans prototype – a car described by Callum as, “arguably the most beautiful Jaguar ever made”. 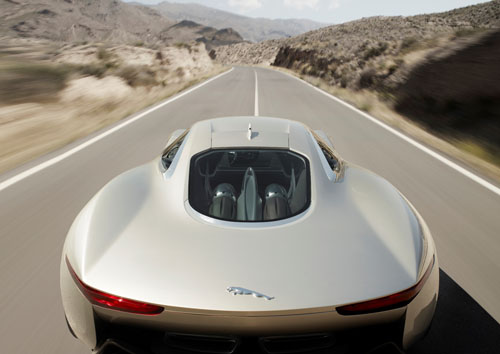 Shorter and lower than the current crop of supercars, its exterior design is about pure performance with a simple central fuselage surrounded by prominent wheel arches. Thanks to the packaging efficiencies provided by the absence of a conventional piston engine, the car’s designers had maximum freedom in placing the mechanical components and creating the most elegant engineering package available.

“The C-X75 is everything a Jaguar should be. It possesses remarkable poise and grace yet at the same time has the excitement and potency of a true supercar. You could argue this is as close to a pure art form as a concept car can get and we believe it is a worthy homage to 75 years of iconic Jaguar design.”

This remarkable range-extension system is a result of Jaguar’s research engineers adopting a clean-sheet approach to the question of powering the supercars of the future. The C-X75 turns to the very latest evolution of a pioneering British technology: the gas turbine.

Developed in partnership with Bladon Jets, the miniaturised turbine blade – the first viable axial-flow micro-turbine – increases the compression and efficiency of micro gas-turbines to the point at which they can be viewed as a realistic power source. Each of the micro gas-turbines weighs just 35kg and produces 70kW of power at a constant 80,000rpm.

The energy created by the turbines and stored in the batteries is transmitted to the road using four independent electric motors. Using individual motors has benefits in terms of weight-saving and distribution, packaging and efficiency. Each motor weighs just 50kg but produces 145kW (195bhp) of power and an astonishing combined total torque output of 1600Nm (1180lb ft).

Because each wheel is driven by its own electric motor, the C-X75 is four-wheel drive – with all the traction, grip and safety benefits that entails – without the weight disadvantages of a purely mechanical set-up. Inherent in this drivetrain is the ability to independently vector torque to each wheel across the full speed range. This offers potential benefits in terms of stability and control, creating an infinitely and instantaneously adjustable traction and stability control system.

With the seats fixed, the steering wheel, controls, main binnacle and pedal box all adjust towards the driver. The seats are attached to the bulkhead as in a single-seater racing car, and air to feed the turbines passes smoothly around them via channels in the structure of the body.

A new interface for the driver has also been created for the C-X75 using high-resolution TFT screens. Building on Jaguar’s 10-year expertise in touchscreen technology, the Jaguar Co-Pilot display in the centre console supports the driver in extracting the full potential of the C-X75 by seamlessly managing information.

The main driver information screen is housed within the instrument binnacle. Needles float on the periphery of the twin cowls and sweep round the outer edge to display the status and rpm of the two turbines. The design team combined designs from instrumentation in the new XJ saloon with those from fighter aircraft to create virtual 3D ‘gimbals’ around which the gauges wrap and rotate to provide status updates.

“Performance through innovation has always been a Jaguar trademark. From the beginning, cars such as the C-Type and D-Type pioneered aluminium construction, aerodynamic design, racing monocoques and disc brakes. The C-X75 demonstrates that Jaguar is still leading the field automotive design and technology. And will always continue to build beautiful, fast cars.”

Jaguar’s expertise in the use of aluminium stretches back more than 50 years to the first XK120s, through the lightweight E-Types, the XK and all-new 2010 XJ. It was with this latter creation that Jaguar fully realised the lightweight metal’s benefits to performance, agility, economy and sustainability in a luxury car.

The C-X75 naturally follows the same construction techniques with an extruded and bonded aerospace-inspired aluminium chassis clad in panels of the same material. Not only does this save weight, crucial in a car with an extreme performance envelope, but aluminium is one of the most easily recyclable metals available, boosting the C-X75’s sustainability as well as its speed.

Aerodynamics have always played a large part in Jaguar design with the late designer Malcolm Sayer elevating it into an art form in cars such as the XJ13, the prototype from which the C-X75 draws inspiration.

Jaguar has increased the design’s aerodynamic efficiency dramatically by opening the front grille and brake cooling vents only when necessary. At the rear corners of the car vertical control surfaces automatically engage at higher speeds to direct airflow aft of the rear wheels for increased stability and efficiency.

The carbon-fibre rear diffuser, a crucial element in guiding airflow under the car and creating downforce includes an active aerofoil, which is lowered automatically as speed increases. Vanes in the exhaust ports then alter the directional flow of the gases to further increase the effectiveness of the Venturi tunnel.