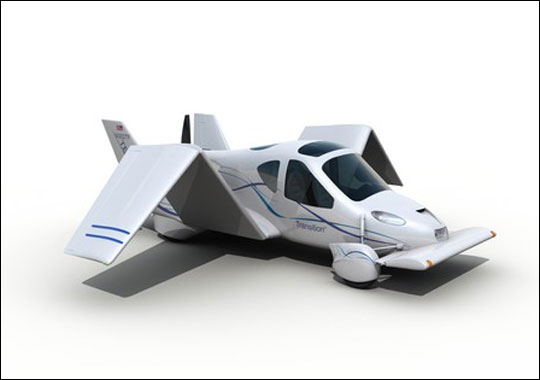 My dream is to fly over the rainbow so high!!!! Well its not a dream anymore. When you see the rainbow just turn on your engine and fly with your car. Yes believe it or not, now you can drive and then just fly with what you are driving.

The first ever flying automobile, your personal mobi-jet in the sky or on the road. The the Terrafugia Transition is currently under testing and if it survives its first test flight, which can transform itself from a two-seater road car to a plane in 15 seconds, is expected to land in showrooms in about 18 months’ time. Add to that its manufacturer says it is easy to keep and run since it uses normal unleaded fuel and will fit into a garage!!!!
The Transition, developed by former Nasa engineers, is powered by the same 100bhp engine on the ground and in the air.
Terrafugia claims it will be able to fly up to 500 miles on a single tank of petrol at a cruising speed of 115mph. Up to now, however, it has been tested only on roads at up to 90mph.
The manufacturers have already received 40 orders, despite an expected retail price of $200,000 (£132,000). Manufacturers mentioned a couple of drawbacks such as getting insurance may be a little tricky and finding somewhere to take off may not be straightforward: the only place in the US in which it is legal to take off from a road is Alaska.
The moment this car hits the region, don’t be scared if you saw a flying car in the air, its not an MEA flight, its not a UFO, it might be your neighbor taking his family to the mountains and he does not want to go through the traffic jam.
So you want to fly to your summer camp, or you just want to keep cursing all the way to the mountains, wishing that cars will disappear??!!!??!?!!