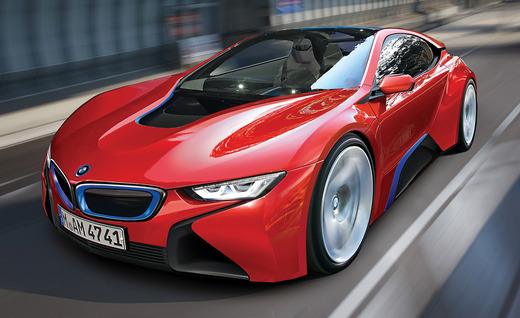 WHAT IT IS: A futuristic sports car that ushers in a new era of technology and design at BMW. Powerful, aerodynamic, and efficient, the i8 is being touted by BMW as the “first real sustainable sports car,” whatever that means. The 911 and the Corvette seem like they’ve sustained themselves pretty well.

WHY IT MATTERS: The i8 is one of  two models under BMW’s new “i” subbrand. The “i” cars will serve as technological and environmental halo cars. The i8 also will usher in the company’s “layered design” styling language, which eventually will spread to the rest of the lineup.

PLATFORM: The i8 has a new platform that BMW calls “LifeDrive” architecture. The “life” part of the equation is a carbon-fiber passenger compartment, and the “drive” portion is an aluminum structure that supports the chassis and powertrain. Curb weight is projected to be about 3300 pounds, batteries included.

POWERTRAIN: A turbocharged three-cylinder gas engine is mounted in back; in front, there’s an electric motor. Combined output is 350 horsepower. The three-cylinder uses BMW’s new inline-engine architecture, while the e-motor is shared with another coming “i” car, the subcompact i3.

WHAT MIGHT GO WRONG: A stratospheric price may seriously limit production volumes. Plus, the styling’s intended targets seem to be autonomous robots, and too few of them have driver’s licenses.