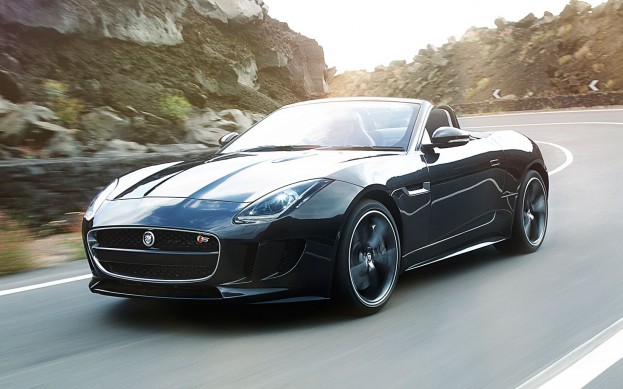 C comes before D, which in turn precedes E. It’s basic preschool stuff, but it’s also a primer on Jaguar’s racing and sports cars of the 1950s and ’60s. The legendary C-, D-, and E-types of that period appeared to be drawing a clear line to a direct successor—an F-type—but the larger, GT-ier XJS became the follow-up.

It’s not as if Jaguar hasn’t flirted with building another small sports car, and rumors started swirling almost immediately following the E-type’s demise in 1974. An F-type concept appeared at the 2000 Detroit show before a mid-engined take on the car was confirmed for a 2004 arrival. (That never happened, by the way.) Then, in 2011, Jag dropped the stunning C-X16 concept onto its Frankfurt show stand, finally signaling that it was serious about bringing a Boxster/Cayman-fighter to market. The production F-type was announced this past April.

Super Is the Only Way to Charge 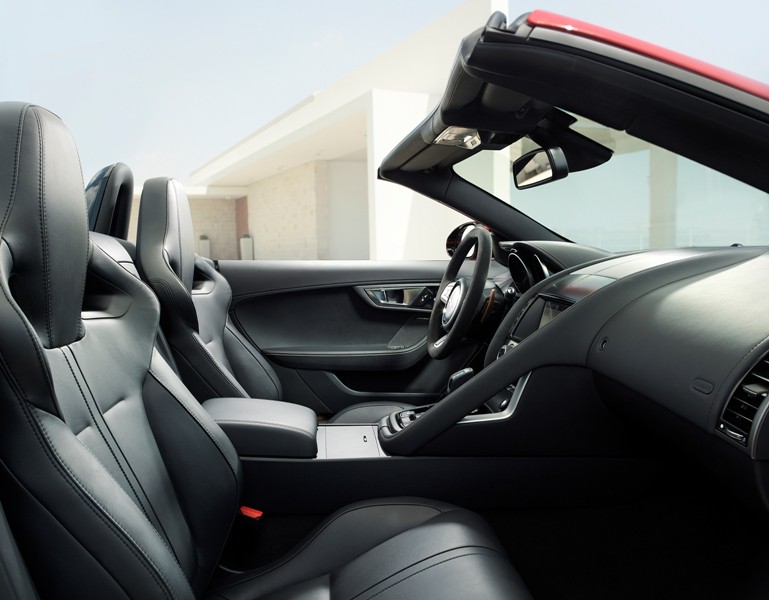 Featuring V-6 and V-8 power, the F-type debuts first as a roadster, but a coupe will soon follow. (Jaguar’s new turbo four-cylinder—essentially a Ford EcoBoost unit—doesn’t make the U.S. options sheet.) Both engines are supercharged, and the six is available in two strengths. The base F-type has 340 hp and 332 lb-ft of torque; the F-type S boasts 380 hp and 339 lb-ft. The top model is the V-8 S, which packs 495 hp and 460 lb-ft in its eight-pot ammo box.

The V-6 is new—it’s derived from the V-8—and the standard output is identical to that of the six-cylinder 2013 XF and XJ sedans. Both S models feature tunes unique to the F-type achieved via changes in supercharger boost. (The V-8 is the same basic piece found throughout the Jag lineup.) Jaguar has pegged 0-to-60 times for the three models at 5.1, 4.8, and 4.2 seconds—the company typically is conservative in its estimates—and the electronically limited top speed rises from 161 mph to 171 and 186. The S models feature launch control, an active exhaust system is optional on the base car and standard on the others, and all engines have a stop-start system.

At launch, every F-type will shuttle its power to the rear wheels via a ZF-sourced eight-speed automatic transmission that has been programmed to prioritize acceleration. The car will cut fuel during upshifts to ensure quick gearchanges, lock the gearbox to bypass the torque converter after second gear, and blip the throttle on downshifts. Gearswaps can be controlled via steering-wheel-mounted paddles or the shifter. Jaguar skipped its rotary gear selector in favor of a traditional lever in the interest of driver involvement. Before you scoff, we have been told that a traditional manual transmission is on the way to offer actual driver involvement.

The future could bring a hybrid powertrain—the C-X16 featured a gas-electric setup—and/or all-wheel drive. We mention these two items because we asked about them and were told that the car has been engineered for many possibilities. This doesn’t necessarily mean that a particular feature will make it to production, only that Jag has thought ahead; business cases must be made, of course. Size-wise, the F-type is 3.8 inches longer than the Porsche Boxster and 0.8 inch shorter than the 911 while being at least 4.5 inches wider than either. The 103.2-inch wheelbase is 6.7 inches longer than that of the 911. 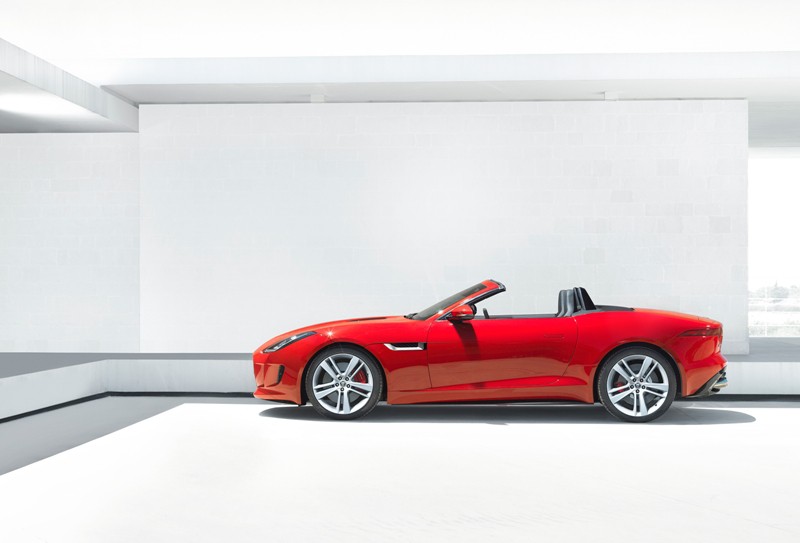 The V-6 S has a mechanical limited-slip differential. The top-of-the-line car gets an electronically controlled diff that actuates a multiplate clutch, depending on available grip. The brakes are progressively stronger as you climb the ladder, with the base car fitted with 13.9-inch front discs and 12.8-inch rears, the V-6 S upgrading to 15-inch discs at the front, and the V-8 S teaming the 15-inchers with 14.8-inch rear platters. The brakes live behind wheels measuring 18-, 19-, or 20 inches. Every F-type features a “dynamic” mode that livens the throttle, reduces the steering assist, loosens the reins of the stability control, and puts the crop to the transmission. The steering is said to be the quickest ever installed in a Jag, and the company’s engineers aimed to make the steering hardware as stiff as possible in the interest of feedback.

The F-type is constructed from bonded and riveted aluminum and largely skinned using the same metal. (The sills, the trunklid, and the spoiler are made from composite materials.) Beyond the structure itself, the front subframe is aluminum, and the control-arm suspension is teeming with the stuff. Jag claims overall torsional stiffness is increased by 10 percent over that of the XKR-S and says curb weights will range from roughly 3500 to 3700 pounds. (A 2013 Boxster S we recently tested tipped the scales at 3070 pounds, a Mercedes-Benz SLK55 AMG at 3593.)

The interior is designed to be very driver focused; Jag even refers to the F-type as a “1+1.” Deployable vents on the top of the center stack allow the dash to fall away while still fitting all the items required in a modern car; they rise when needed and stow themselves when the car has been sufficiently heated or cooled. Jaguar and its corporate sibling Land Rover have become increasingly enamored of all-digital, screen-based gauge clusters, but physical dials are used here because they “seemed right” for a sports car. We were told the color, trim, and materials options for the cabin will be extreme. The heavily bolstered, optional seats in the cars at a preview event had cutouts for multipoint harnesses, and we mused that they’d work nicely in a harder-core variant—and received a wry smile in reply. (If produced, such a model would probably be based on the forthcoming coupe, at least at first.) 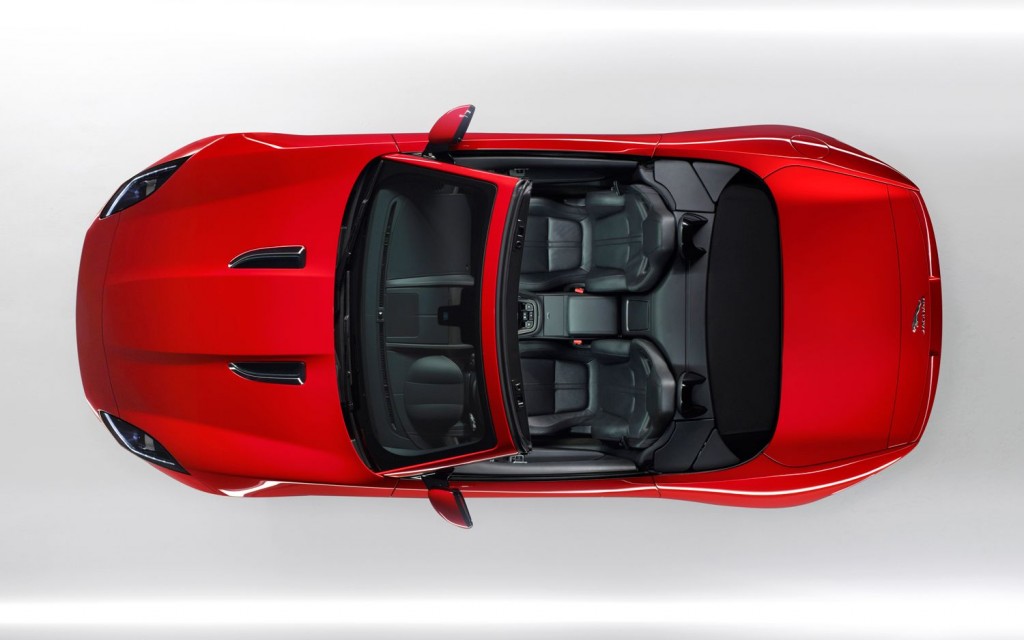 Styled under the direction of Ian Callum, some general shapes bring to mind both the Maserati GranTurismo and Henrik Fisker’s BMW Z8, but the F-type is unmistakably a Jaguar, beautiful and bold. A deployable spoiler and retractable door handles help maintain its pure lines, as does the retractable softtop (it rises up or down in 12 seconds) that drops below the beltline. Every inlet on the body is functional, including the side vents­; Jaguar thought it would be silly if they didn’t do anything, but Callum tells us that their real job is to hide the cutline for the clamshell hood. The grille, flanked by vertical airways, is a take on the current Jaguar face as seen on the XF and XJ. A nod to the old E-type exists in the V-6 models’ tailpipes, which are clustered in the middle; the V-8 S gets quad tips arranged with a pair split to each side. The headlamps incorporate daytime running lights, and the taillights—they remind us a little of the eyes of Marvel Comics’ Sentinel characters—are thin slashes of red that Jaguar says will become a signature for the brand.

The Jaguar F-type goes on sale here next summer. We think pricing will start somewhere in the gulf between the Boxster and the 911. On paper and in person, the car impresses, but we’ll need some time behind the wheel to find out if it truly lives up to its promise. Whether it’s good or not, let’s hope it doesn’t take another 40 years to see the next new Jaguar sports car.