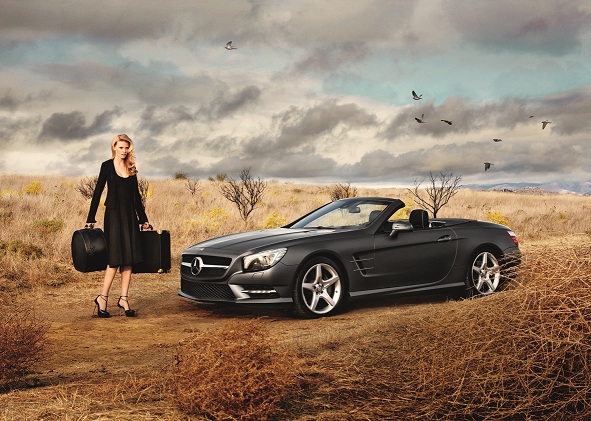 T. Gargour & Fils S.A.L., the exclusive and sole agent of Mercedes-Benz in Lebanon, prepares for the launch of the “SL” style icon which embodies the trifecta of cultivated sportiness, ultimate comfort and state-of-the-art technology. These three dimensions will be available to an audience that has been accustomed to selecting the “best or nothing” just as the Mercedes-Benz slogan states.
The “SL” by Mercedes-Benz, whose launch dates back to 1952, has been continuously maintaining its  position for over 60 years as one of the most fascinating and iconic luxury sports cars in the automotive industry. Most importantly, the “SL” which also features a long legacy of technology, lavish details and innovative safety concepts, has once again stolen the limelight and taken breaths away during its debut in New York.

The “SL 350” is an astonishing mix of athletic style and refined elegance while maintaining consistency and flow within the lines.  The acute attention to detail and use of high-grade materials in the manufacturing process are the two factors that sum up the character of this car, specifically the interior, elevating this car to a whole new level of impeccable style.

The new generation of “SL 350” is made almost entirely of aluminum making it weigh significantly less when compared to its predecessors, in addition to giving it greater dynamic and lean performance. Moreover, its “V6” engine is characterized by 306 horsepower that does not require more than 5.9 seconds reaching 100 km per hour from standstill, giving it further momentum and agility.  And for an unmatched driving experience, the vehicle has been fitted with a “Front-Bass” system for first-class bass reproduction and a panoramic vario-roof, which takes no more than 20 seconds to open or close. On top of that, the glass used is set to allow the driver to control its degree of transparency while the leather upholstery effectively resists heat and sunlight entering the car.

Commenting on the vehicle, Mr. Cesar Aoun, General Manager of Mercedes-Benz at T. Gargour & Fils said, “The refined features incorporated in the SL 350, the extraordinary integration of its interior and exterior engineering and its innovative safety and security concepts make it this generation’s ultimate vehicle. It truly reflects the Mercedes-Benz image and its impressive record filled with innovations and prestigious achievements in the world of automobiles.”

The internationally-renowned Dutch supermodel, Lara Stone, who had participated in a short film for the “SL”, said: “The SL 350 is the modern car which reflects both my image and way of living. Its sexy and attractive interior makes it absolutely amazing, just the way I like.”