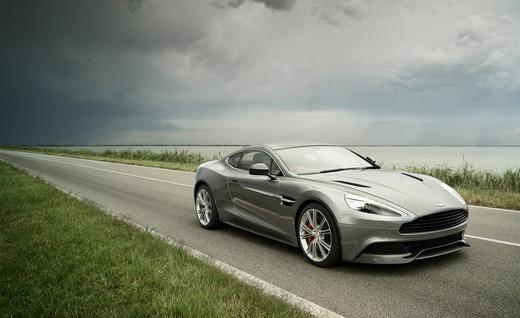 Aston Martin executives get philosophical when they describe the development process of the new Vanquish and its underpinnings. The British manufacturer’s new top-of-the-line model is still based on the VH architecture that debuted with the DB9 in 2003. But VH is not a platform, Aston suits explain: It is a method and a way of continuous improvement. VH stands for “vertical horizontal”—“vertical” meaning shared construction and “horizontal” meaning shared components, i.e. across several models. With each significant new vehicle introduction, VH enters a new generation; the architecture is now entering gen four, it is explained.

The new Vanquish replaces the DBS, which replaced the first-generation Vanquish. That car was launched in 2001 as the brand’s top-of-the-line model—a rare and expensive car hand-assembled in Aston Martin’s old Newport Pagnell production site. Resurrecting the Vanquish nameplate emphasizes the new car’s status at the top of the brand’s lineup, while distancing it from the DBS, which was too close to the DB9 not only in name, but also in execution.

The Vanquish does actually mark a significant evolution of the VH architecture in a few ways. For starters, most of its body panels are constructed from carbon fiber; they are hung on an upgraded version of Aston’s bonded-aluminum monocoque. Aston claims the new platform is 25 percent torsionally stiffer than the DBS’s. The front-end structure is lower and also lighter, thanks to the use of hollow-cast aluminum. Overall weight has been reduced by 120 pounds or so; based on DBS models we’ve weighed, that will put the Vanquish at around 3800 pounds. The Vanquish has a stated 50/50 weight distribution; the steering is of the conventional, hydraulically boosted type. Carbon-ceramic brakes are standard, as is a three-mode (Normal, Sport, Track) driver-selectable suspension. Twenty-inch wheels are standard, and are fitted with 255/35 front and 305/30 rear Pirelli P Zero rubber. Vehicle dynamics benefit from mounting the V-12 engine lower than before, which was required to comply with pedestrian-protection regulations. 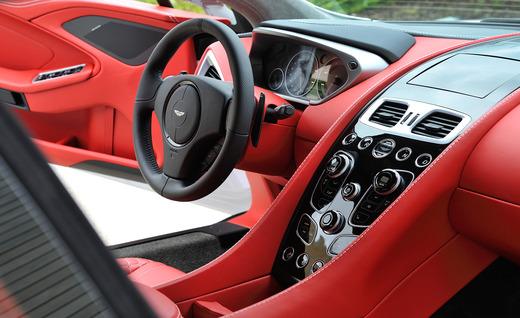 The Vanquish retains Aston’s characteristic, sloping shape of the center console, the expensive-looking semi-transparent gauges, and the swing-up navigation screen. But the climate controls and the telematics system have taken a leap forward. There now are two rotating knobs and two touch-sensitive pads, a system that’s not only intuitive but also clears up the clutter that had accumulated on the center stack over previous generations of Astons. Bang & Olufsen provides the all-important branding for the audio system, a choice that doesn’t seem so exclusive anymore, given that the Danish brand has recently migrated into far more pedestrian cars. Far from pedestrian is the wild stitching that Aston offers for the Vanquish’s seats, whether you specify two or four of them—the model is available as a pure two-seater or in a 2+2 configuration. The trunk holds an impressive 13 cubic feet of luggage.

The Looks Evolve, Too

Beyond the Vanquish’s technical improvements, we also find the styling to be of particular significance—something we haven’t said about an Aston Martin in a long time. Apart from the Zagato and One-77 models, the Vanquish marks the boldest departure from the, er, highly coherent design language established by the DB9 and V-8 Vantage. While undeniably attractive, the language made many—if not all—of Aston’s recent models difficult to tell apart from one another. As to the Vanquish, new elements include the half-wing shape to its taillights, the angular rear side windows, and trim—various materials will be offered—that reminds of the mold-breaking One-77’s. Sweeping creases in the roof flow under the rear window, and the rear spoiler is integrated into the body. The front end, with its bixenon headlights and LED daytime running lights, still bears a clear familial resemblance, but is nicely evolved nonetheless. Exposed carbon fiber is used for the front splitter, rear valance, and side skirts. It is certainly a handsome car. “The styling tells you to move out of the way, in a polite way,” says a designer.

Pricing for the U.S. starts at $279,995 including destination and gas-guzzler tax—that’s $581 less than the base price of the outgoing DBS. The first cars will be delivered to customers in early 2013; a convertible version is sure to follow.

As to whether VH is an architecture, an ever-changing pile of parts, or simply a philosophy—after seeing this new Vanquish, who cares? 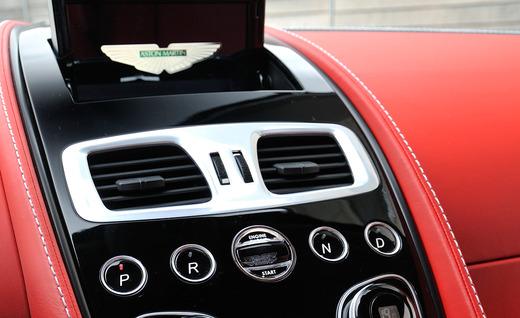