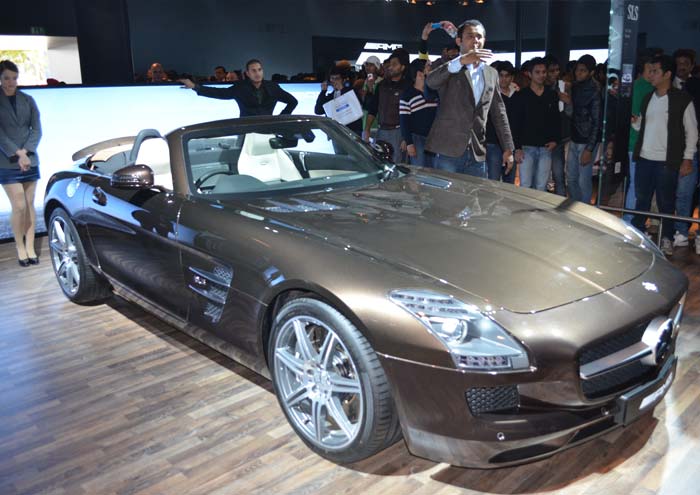 The 563-horsepower SLS AMG Gullwing Coupe has gone topless to create the Mercedes-Benz SLS AMG Roadster- the range and brand-topping model for the prestigious Mercedes-Benz brand.

Boasting an AMG-designed chassis, body and powertrain, the SLS Roadster is officially considered the second car to be independently developed by AMG. The SLS Roadster is, obviously, based very heavily on its gullwing sibling – sans the iconic gullwing doors that give its coupe counterpart such a unique appeal.

Under both hoods
The SLS AMG’s compact cloth fabric top was chosen for three reasons: Its light weight compared to a folding metal roof, its trim folded dimensions and its unique style. Capable of stowing away in just 11 seconds, it can be operated at speeds up to 31 mph.

Unlike the gullwing, the Roadster’s doors open traditionally with little pomp and circumstance. But that doesn’t mean it isn’t impressive inside.

Under the roof, things are mostly standard SLS AMG. That’s to say that the car drawsinspiration from the original 300SL Gullwing of the 1950s, a legendary racing and road car that is highly valued by collectors today. The dashboard is retro-modern, with all the latest Mercedes-Benz luxuries and high-grade materials and trim that can be tailored to an individual buyer’s tastes. 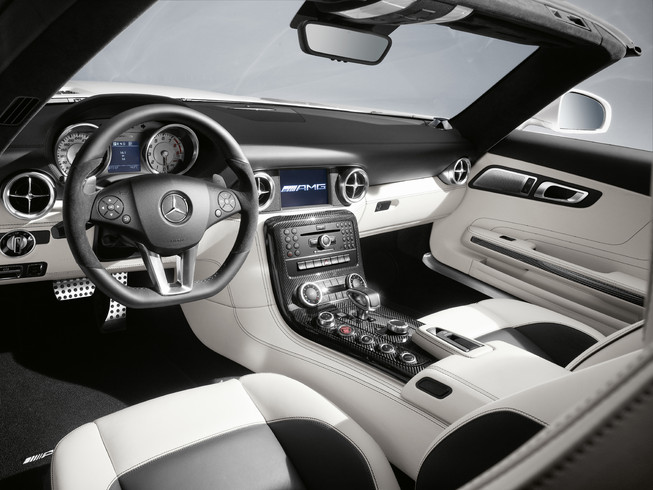 Its dashboard is aircraft-inspired, as well, thanks to the jet engine-resembling vent nozzles and the aircraft thrust control-shaped E-Select gear lever.

That lever helps fire up the AMG Speedshift DCT seven-speed automatic. With four modes – comfort, sport, sport+ and manual – the automatic can fire off shifts faster than any driver could. A Race Start function optimizes the car’s sophisticated traction control system and mechanical differential lock for optimal launches.

Motivating the SLS AMG is the division’s 6.3-liter V8, which puts out 563 horsepower at 6,800 rpm and 479 lb-ft of torque at 4,750 rpm. This thrust propels the SLS AMG to 60 mph in a mere 3.7 seconds and the car is electronically limited to an impressive 197 mph. As a result, both roadster and gullwing boast similar performance figures.

Designed to handle
Like the coupe, the SLS AMG Roadster is more than just an acceleration machine. A low-mounted engine with a dry sump system helps ensure optimal weight distribution and a nearly ground-level center of gravity.

The engine is front-mid mounted, meaning it lies as close to the center of the vehicle as possible, which helps AMG achieve a 47/53 weight distribution. A broad track – 66.2 inches up front and 65.1 inches out back – improves grip and control.

All four wheels hit the ground thanks to double wishbone suspensions with a track road, a Formula 1-derived technology.

Buyers can select either the standard sport-oriented suspension or a new Adaptive AMG Sport Suspension with three modes (comfort, sport and sport+). Each mode features its own shock tuning to alter the ride quality based on the type of driving desired.

Charting the changes
For the latest model year, Mercedes has updated the SLS AMG Roadster with a host of new performance, safety and appearance options.

The most significant change arrives in the form of the new AMG Ride Control sports suspension, which utilizes electronically controlled dampers to allow the driver a choice of three different suspension settings. 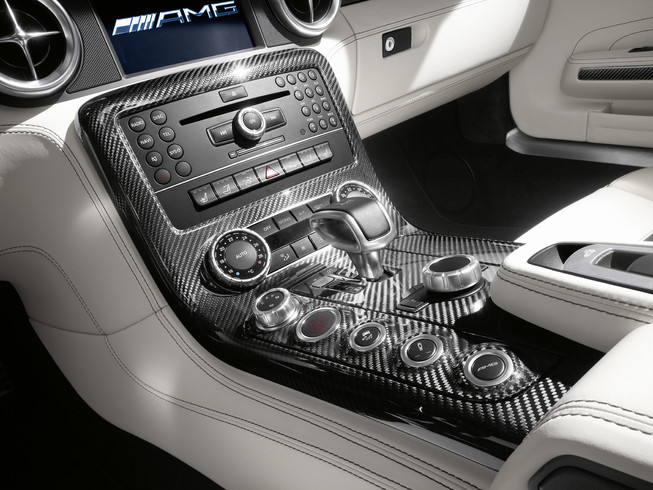 The first setting, “Comfort” mode, as one would expect, is a relatively soft setting for long distance cruising or traveling over bumpy roads. “Sport” tightens up the shock absorbers to cut down on body roll and is billed by AMG as the best balance between responsiveness and comfort. Finally, “Sport Plus” is reportedly optimized to yield the quickest times while bombing around on a race course, should SLS AMG owners be so inclined.

AMG says the optional system is controlled by electromagnetically actuated valves in the shock absorbers control the oil flow between the lower and upper chamber.

Other new options include lightweight AMG 10-spoke forged wheels with matte black finish, red-painted brake calipers and several new exterior and interior colors. The newly available Blind Spot Assist system is a good choice for those who don’t want their limited-visibility SLS AMG to participate in a merger of equals with another car when changing lanes.

Key competitors
When it comes to comparing supercars things can get a bit tricky: do you use acceleration? Top speed? Engine size? Rarity? Prestige? Styling? Price? The answer is that it varies based on the buyer, but for this convertible don’t surprised to see the Ferrari 458 Italia Spyder and Audi R8 V10 Spyder on the short list. 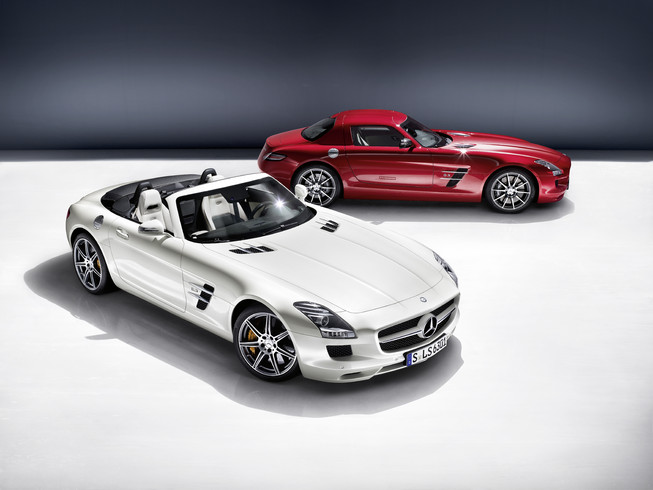