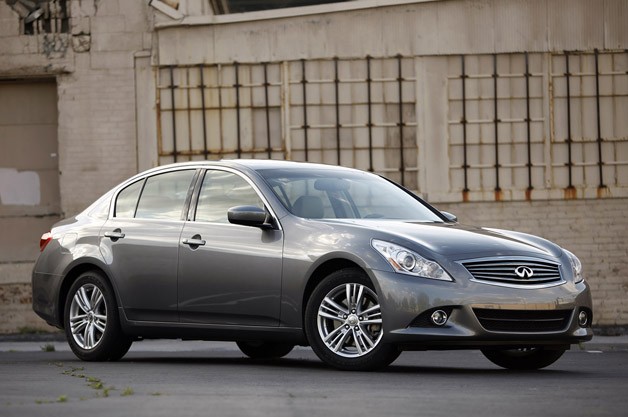 Brands like Infiniti built their empires convincing the world that the badge on the hood shouldn’t matter nearly as much as the bones underneath, but Japan’s cadre of luxury brands isn’t the only group peddling bang for the buck these days. Manufacturers from Kia toVolkswagen now come with cabins packed with luxury amenities. Even the lowly Ford Fiesta can offer buyers high-quality leather seating and enough technology to put the subcompact into geosynchronous orbit. So why bother stepping up to the mid-level luxury league at all? What differentiates a nice car from a fine automobile beyond a little inflection and a lot of marketing?

European brands like BMW and Mercedes-Benz happily prattle on about pedigree and superior engineering, but at the end of the day, a luxury machine simply has to feel special. Foodies often speak of the fifth flavor, umami. Directly translated, the word means “good taste” with an element of savoriness, and automotive luxury is built on that same intangible sensation. Perhaps better than either Acura or Lexus, Infiniti has become a master of that something special, offering its customers elegant style, well-crafted interiors, innovative technology and a superb driving experience. The 2012 Infiniti G25 looks to add superior fuel economy to that list, but can it do so without losing its luxury essence?

Catch a glimpse of the 2012 G25 on the street, and it’s easy to mistake the latest addition to the Infiniti stable for its more powerful twin, the G37 Sedan. There’s little to differentiate the two models aesthetically save wheel choices and two digits of nomenclature, and that’s a good thing. Despite its age, the current G Sedan design remains fresh, attractive and clearly Infiniti. Buyers looking for all of the swagger of the G line with a lower operating cost will be right at home behind the wheel, and the rest of the world will be hard-pressed to know there isn’t a 3.7-liter V6 under the hood.
The same aggressive front fascia stays on for the smaller-displacement model as do the HID projector headlamps up front. The G25 even wears the same dual oval exhaust outlets as the G37, making for a convincing clone of the brawnier machine. Our tester came with the base 17-inch alloy wheels, and while the rolling stock boasts an attractive design, they look small under the rounded fenders and bulging haunches of the four door. The look does more to take away from the sedan’s presence than the smaller-displacement V6 could ever do.
If only it were so simple indoors. Infiniti has made a name for itself by designing and executing some of the nicest cabins in the segment, at least on recent models like the EX35 and QX56. Unfortunately, this isn’t one of them. Whereas the rest of the family offers dashboards covered in quilted leather, handsome wood and brushed metal accents as well as a refreshing dearth of plastic, the 2012 G25 misses the boat on all of those marks. While the gauges, climate controls and other switchgear are all lifted from the Infiniti parts bin, cheap-feeling gray plastic abounds along the center stack and elsewhere. It’s as if the year 2002 sprung forward in time to come poison one of our favorite Japanese sedans. The seven-inch LCD screen mounted in the dash lacks a touch interface and boasts iffy graphics at best, and the six-speaker stereo doesn’t have the punch we expect from a luxury manufacturer. As a result, this is the most Nissan-feeling Infiniti cabin since the G20. To be fair, the G is getting on in years and the G25’s instrument panel is basically the same as the rest of the lineup, but the lesser trim bits and baubles really add up.The G25 also greets the driver with a disappointing steering wheel. The cheap-feeling leather cover could pass as vulcanized rubber, and the leather center section is framed by impressive expanses of the same plastic found elsewhere. Likewise, the controls seem unnecessarily spread out across the wheel, requiring a second glance even after a week with the car.

The good news is that the G25 retains the comfortable seating of the G37. The leather covers feel high-quality to the touch and remain serviceable even after endurance hauls of six hours or more. Buyers looking for a suite of power adjustments might as well look elsewhere, though, as the entry-level G relies on manual lumbar support, even on the driver’s side.
From this vantage, the G25 simply appears to be a stripped-down version of our beloved G37, but it’s what’s under the hood that makes this sedan worth considering over its better-executed sibling. In the interest of full disclosure, we should make it perfectly clear that the 3.7-liter VQ V6 found behind the G37’s headlights is one of our favorite engines on the planet. It makes all the right noises, puts down excellent power and remains endearingly gruff, so when we say Infiniti may have done something brilliant by yanking the larger six-cylinder from the engine bay, we want you to comprehend the full scope of our meaning. In an effort to stave off higher fuel prices and ever stiffer Corporate Average Fuel Economy standards, engineers swapped the delicious 3.7-liter V6 for a smaller-displacement 2.5-liter unit.With 218 horsepower at 6,400 rpm and 187 pound-feet of torque at 4,800 rpm, the engine falls short of the 3.7-liter six by 110 horses. That’s a notable chunk in a vehicle that tips the scales at 3,549 pounds, and the shortfall is certainly apparent off the line. Still, the 2.5-liter V6 hardly makes the G25 a dog. Acceleration is more than adequate so long as the driver is willing to pin the machine’s ears back and reach all the way to the 7,500 rpm redline. This engine makes its power in its upper octaves, and getting anywhere with a purpose requires plenty of time with the tach pointed at the passenger side.
That’s just fine for scoundrels like us who don’t mind beating on someone else’s machine, but buyers familiar with the buttery torque of the G37 may have an issue with ringing their new car’s neck at every onramp. The good news is that the reduction in grunt yields improved Environmental Protection Agency fuel economy ratings. The 2012 Infiniti G25 is good for 20 mpg city and 29 mpg highway, which is consistent with our time with the vehicle. A G37 Journey makes do with 19 city and 27 highway.
We covered a little more than 1,100 miles from Knoxville, Tennessee to Washington, D.C., during which time we saw as much as 33.4 mpg from the onboard mileage calculator as we slogged up I-81. After a lovely tour of all the wonders of traffic and construction the Beltway has to offer, including an hour-and-a-half stint in stop-and-go traffic, that number fell to 27.9 mpg by our at-the-pump calculations. Refreshingly, the in-dash display proved to be within .2 mpg of our figure.
On the highway, the cut in power is considerably less noticeable. Pop into the passing lane, introduce the accelerator to the carpet and the seven-speed automatic transmission quickly finds the appropriate gear to get the engine screaming. The run from 70 mph to triple digits takes surprisingly little time, and if anything, the gearbox is remarkable for its lack of drama. As in other applications, shifts are smooth and precise, helping to increase the smaller-displacement V6’s livability by leaps and bounds.
Duck off the highway and the G25 provides the same level of handling prowess that makes the G37 such a sweetheart in our eyes. The suspension is firm without any harshness, and the neutral turn-in and slight tendency to oversteer make the sedan a playful dance partner should the mood strike. Unfortunately, engineers cursed the G25 with decidedly under-assisted steering. Manipulating the wheel at a stop or at low speed requires a surprising amount of effort for this class, and the story doesn’t get much better once you’re at apex-clipping velocities.As a result, the steering feels falsely heavy, which is constantly at odds with the four-door’s fairly quick steering rack. The combination makes the G25 less intuitive to drive aggressively than its sibling. Of course, this model makes no real attempt to distinguish itself as a sports sedan, so comparing it to the athletic G37 may be a bit of a miscue. Rather, the small-displacement G serves as a fit contender for the Lexus IS250. With 14 additional horsepower, a more advanced gearbox and a lower MSRP, the Infiniti has plenty of checks in its column, though the Lexus manages 1 mpg better in both city and highway fuel economy. The 2012 IS250 also weighs in at 100 pounds less than the baby G. 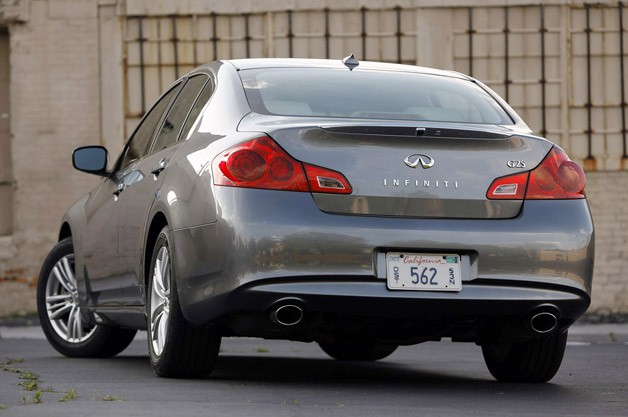 Speaking of price tags, buyers can look forward to shelling out $32,600 for the 2012 G25, plus an $895 destination fee. Our tester came with just one option, a $1,000 moonroof, though the Journey trim threw in Bluetooth hands-free calling, XM satellite radio and dual-zone automatic climate control. That price puts the G25 under the $34,765 that Lexus asks for the 2012 IS250 with an automatic transmission.But the truth is that the IS250 is graced with a much more upscale interior, and while we’re in love with the 2.5-liter V6, seven-speed automatic transmission and capable handling found in the G25, buyers in the class rightfully expect the cabin to match the badge in the grille. Infiniti has done a smart job of building a more efficient G, but the sedan has lost much of the umami that separates the mid-level luxury line from its Nissan counterparts.
Source: http://www.autoblog.com/