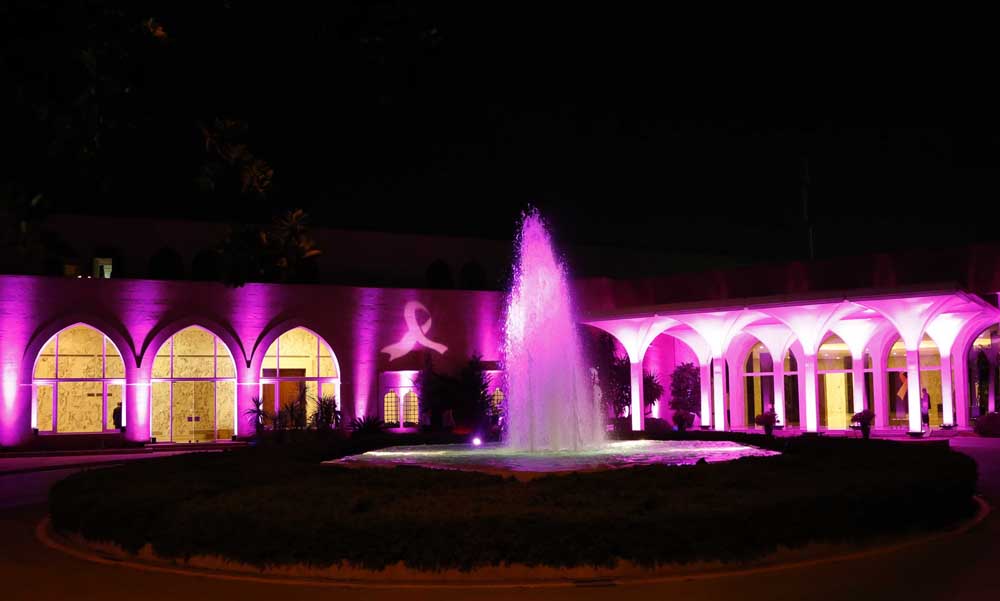 The Lebanese First Lady Mrs. Wafaa Sleiman hosted the launching ceremony of the 2012 National Breast Cancer Awareness campaign, organized by the Ministry of Public Health in collaboration with Hoffmann-La Roche, with the support of the Lebanese Order of Physicians, the Order of Pharmacists in Lebanon, and the National Breast Cancer Committee and under the theme “Get A Mammogram and Take the Burden Off Your Chest”. The Presidential Palace was lit in pink for the launching ceremony which was attended by the Minister of Public Health H.E.M. Ali Hassan Khalil, Mrs. Randa Berri, Mrs. May Mikati, Mrs. Mona Hraoui and a number of current and former Ministers and Deputies, along with officials of the National Breast Cancer Committee and many political, social and media figures.

The primary assessment of the National breast cancer awareness campaigns led by the Ministry of Public Health in collaboration with Hoffmann-La Roche over the past ten years has shown a record success in the use of mammograms for early detection of breast cancer. Indeed, the number of women above forty years of age who are benefiting from this campaign and undergoing a mammography is constantly increasing, whereas the participation rate has reached 55% in the targeted category.

On this occasion Mrs. Sleiman expressed her joy for having noted the “serious and efficient perseverance in promoting the awareness of women in Lebanon about the importance of tackling this disease, in line with the culture of prevention and no-negligence, which constitutes in our times the pillar of modern medicine”. She also wished for this “culture to expand beyond its frame which is currently confined to early detection, to build-up a global concept of health and prevention as a first and basic objective for any health policy in Lebanon.”

In turn, the Minister of Health Mr. Ali Hassan Khalil stated: “It is true that October has been designated as the National Breast Cancer Awareness Month; yet, raising awareness and educating the society about breast cancer are very important and should continue all year round. The National Breast Cancer Awareness Campaign is the fruit of cooperation between public and government institutions, medical orders and civil associations, with the support of the private sector represented by Roche, in view of ensuring the success of the awareness efforts against breast cancer, exchanging information about this disease, and facilitating access to medical services.”

Abed Al Rahman Sabra, Country Manager of Hoffmann-La Roche, declared that this collaboration “has begun since the inception of the national breast cancer awareness campaigns, ten years ago. It has been an efficient means to raise awareness about various breast cancer issues and launch a nation-wide dialogue about breast cancer”. “Despite all the success that has been achieved, the road remains long before we reach our desired goal. Today, more than any time before, we remain committed to educating and empowering women to take care of their own health”, he added.

What characterizes the 2012 campaign is that many breast cancer survivors have decided to support it with their valuable testimonies, emphasizing the importance of early detection to optimize the chances of complete remission.

The nation-wide awareness campaign is set to run for three months enabling women to gain access to discounted mammography exams which will remain available till the end of December 2012. Participating private hospitals and medical centers across Lebanon will reduce their mammography fees to L.L. 40,000 whilst government hospitals will offer free mammograms during the entire phase of the campaign.

To expand the outreach of the core awareness message to a wider target audience and impact more lives, the national committee of experts announced that the annual national program will involve more public lectures which will be organized in collaboration with the municipalities and women NGOs, and run by the medical societies and the cancer patient support groups.

The campaign will also be promoted through various media outlets including links on leading Lebanese online portals and news sites, through educational newsletters. Finally, special thanks go to the journalists and representatives of all the media for their support to this national campaign in order to help deliver its message and spread awareness about the importance of breast cancer early detection.

In order to enhance awareness, the 1214 hotline will be available throughout the campaign phase to answer basic questions related to the campaign, and to direct ladies to the nearest mammography center.