The Marussia Formula 1 Car at City Mall and ABC Ashrafieh 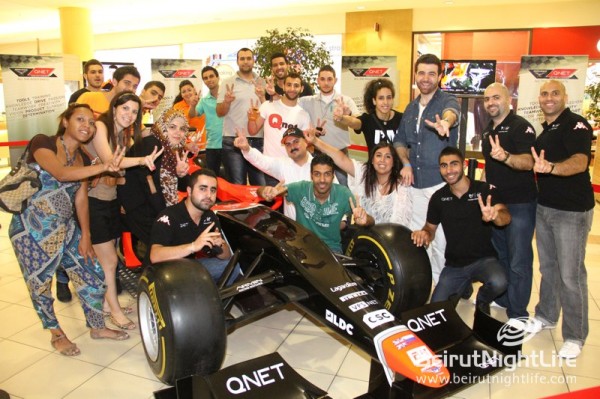 The Marussia F1 Team’s Formula One (F1) race car is currently on a journey around the globe, thanks to the QNET Show Car World Tour 2012, and is making two pit stops in Lebanon.

QNET – a leading international direct selling company, specializing in exclusive lifestyle brands, is the team’s Official Direct Selling Partner and the organizer of this tour. Marussia F1 Team fans and supporters of the high-speed sport can enjoy the rare opportunity of seeing a stunning, state-of-the-art F1 car up-close.

F1 enthusiasts and Beirut’s shoppers can catch the QNET-sponsored Marussia F1 Team show car in the main entrance of the CITYMALL, Dora Highway, Beirut, from May 19 to May 25.

The QNET Show Car World Tour will then move to the ABC Mall, Ashrafieh, also in Beirut, where the impressive vehicle will be located at the mall entrance from May 26 June 1. Motor racing fans will be closer to the car than they ever would at a race, getting a unique view into the intricacies behind an F1 car’s engineering and design. The two stops in Lebanon also invite everyone for photo opportunities with the car before the tour moves to Central Asia.

The QNET Show Car World Tour 2012 has already visited Kuwait, Kuala Lumpur, Abu Dhabi, and Saudi Arabia’s Riyadh, allowing QNET to share this partnership experience with its millions of customers and distributors worldwide, as well as fans and supporters of the fast-paced sport.

QNET has been involved in motorsport through its sponsorship of teams in the Formula BMW, Formula V6 and the GP2 Asia series since 2006. November 2010 marked its entry into the prestigious Formula One World Championship. At this time, Malaysian entrepreneur Vijay Eswaran, the Executive Chairman of the QI Group of Companies – of which QNET is the flagship subsidiary – and Sir Richard Branson of the Virgin Group, announced the three-year partnership between the then-Virgin Racing team (now known as Marussia F1 Team, since January 1, 2012) and QNET.

The F1 Show Car sports the livery of the 2012 Marussia F1 Team cars, which this season are raced by Timo Glock from Germany and Frenchman Charles Pic. Mr Joachim Steffen, Director of Research and Development, QI Group, and responsible for the company’s sports sponsorship portfolio (which also covers the Asian Football Confederation Champions League, among others), said the Show Car is a key engagement tool for QNET.

“We are proud of our multicultural, worldwide presence in almost 30 different countries through representative offices and agency partnerships, and customers in practically every country on the planet,” said Mr Steffen.

He continued, “With such a worldwide reach, we want to share our exciting F1 sponsorship with everyone involved in our company, which is why we’re taking the race car on this world tour, allowing our customers and Independent Representatives the opportunity to see the QNET-branded Marussia F1 race car for themselves.”