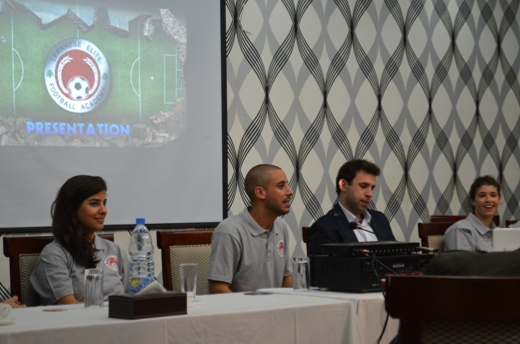 On Thursday the 24th of January 2013, a conference discussing the February 1st opening of the new football academy, LEFA (Lebanese Elite Football Academy), was held at the Midtown Hotel & Suites, Hamra.

The objective of the conference was to have an open, interactive discussion between the staff, parents and journalists. The three founders of LEFA, Nadia Assaf, Roy Abi-Elias and Walid Arakji, presented a PowerPoint that covered topics such as the academy’s philsophy, goals, vision, etc.  LEFA’s coaches and physiotherapists were also in attendance, greeting the parents and answering any questions.

LEFA is a sister academy of GFA (Girls Football Academy) the first exclusive female football academy in the Middle East.

What makes LEFA a unique academy, differing from the rest of the academies in Lebanon, is its technical director and founder, Roy Abi-Elias. Roy is an ex-professional player from the UK who holds a UEFA “A” license and an impressive amount of coaching experience. Roy has been the head coach for many academies in Lebanon, including Athletico Sports Club and BFA (Beirut Football Academy. Prior to Lebanon, he worked in England as head coach at FC Wimbledon and Wycombe Wanderers FC.

Roy’s team philosophy is to produce teams that dominate through possession, control matches by playing attractive attacking football, and give our talented players a platform to express themselves as individuals.  Players from 4 to 15 years old will benefit from a solid structure with a curriculum developed to follow this philosophy.

LEFA is situated in a safe location in the heart of Beirut, Nejmeh Stadium, Manara, Beirut.