Of Others Hosted by Katya Traboulsi 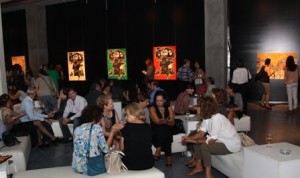 Launching of the exhibition “Of Others-Des Autres” hosted by Katya Traboulsi and organized by Events Production in collaboration with Beirut Souks. The art event dubbed “Of Others…Des Autres”, attracted a large crowd to the Venue Hall in Beirut Souks – Solidere – and will continue doing so till the 23rd of October 2011 from 4pm till 10pm.

74 original texts painted are showcased at the Downtown’s venue. Traboulsi chose to highlight in these artworks “the other” as a message promoting tolerance and encouraging people to get to know the importance of the other.

The artist says about that: “The other is a true dimension that shapes our behavior as well as our subconscious, it is not just a state of mind; it is both opposing and complimenting. An insightful view of the other side, the art collection represents a modern and political call that encourages having a deeper look at the opposite side.” 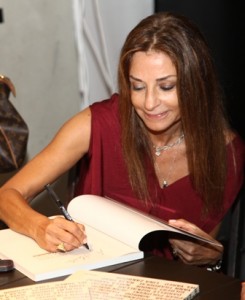 The concept behind the artworks exhibited, aims to create a multicultural expression that will bring together two forms of art: Writing and Painting. As Katya Traboulsi puts it: “The written words, inspired me to provide a visual interpretation through art.”

This unique project joins an array of figures including international thinkers, artists, celebrities, journalists, business leaders from different backgrounds. Some of those characters are low profile while others enjoy worldwide fame, but they all express themselves exclusively through the theme of ‘The Other’.

Katya Traboulsi explained: “I translate each of those texts in my own language in two different formats: Original paintings on canvas and a book comprising the original texts and artworks. Each author’s text will be printed on the left-hand page of the book while on the right; the page will reveal a graphic composition merging the author’s words with the paintings.”

The book “Of Others – Des Autres” from publisher “Tamyras”, launched during the Venue exhibition in Lebanon, will be followed by a launch in France in early 2012. Part of the proceeds from the sale of the book will be donated to “Heart Beat”.

The exhibition is organized by Events Production, the organizer of several prominent artistic and cultural events such as “Beirut Race Cup” and “The Classic Car Show”.