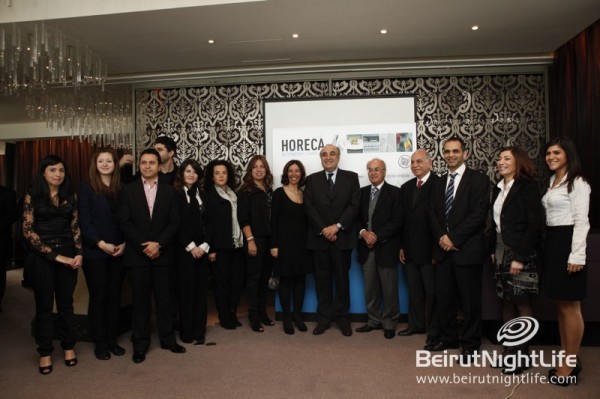 The 19th edition of Horeca is coming up from March 20 to 23 at Biel, under the theme of “Beirut, Capital of Taste”.

A Horeca press conference was held at the Phoenicia hotel Beirut on February 15, under the patronage of his Excellency, Minister of Tourism, Mr. Fady Abboud.

Attending the press conference were presidents of associations and syndicates from the hospitality industry as well as media representative who showed their support once again for Horeca.

The speakers at the press conference were the following:

Joumana Dammous-Salamé, Managing Director of Hospitality Services announced the increase of demand for Horeca 2012, confirming that 90% of the venue’s space has already been reserved, stating, “Horeca 2012 will be the occasion for industry professionals from the region to gather under one roof during the 4 days event, network and checkout the competition”.

Salamé continued to thank all partners and sponsors of Horeca, as well as Phoenicia Hotel and Le Vendome Beirut for their partnership and support.

Local chefs as well as 15 international chefs will host and participate in the Hospitality Salon Culinaire across 15 categories and 200 cooks representing well known establishments.

On this occasion, Press Awards were distributed to the Lebanese media to display gratitude for their coverage of Horeca over the past years. As a Horeca Media Partner, BeirutNightLife.com received an award at the end of the event.

The press conference ended with a brunch at Eau de Vie.