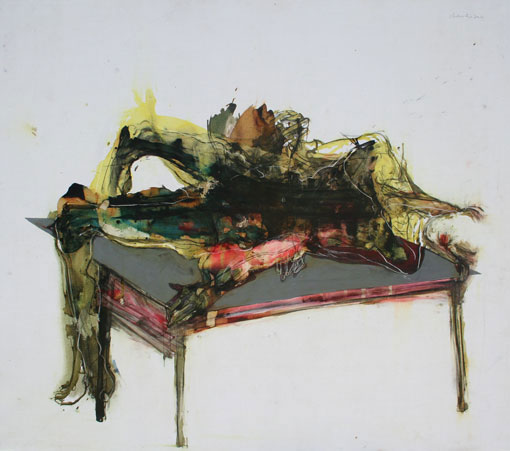 If you’re into mixed-media head down this weekend to Agial Art Gallery and view the new exhibition by Shawki Youssef – exhibition of paintings and works on paper titled “Hollow Flesh”.

Bron in 1973, Lebanon. In his own words, he describes this new body of work as follows:
I believe that my work on body, in singular or in plural, is of an emotional nature. An emotional nature that pushes lines to be in 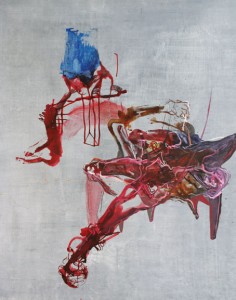 the “closest spaces to my neurons”*; A space/feeling in which the aim of drawing, (since I constantly draw, and paint less and less), is to “feel” or to “remember with love” each body line I know.

These body lines are deformed, mutilated and internally collapsed by two factors: On one hand, the work tells about the absence of the object of love, the absence of the body. It is about the early frustrations as of the ongoing deficiencies of the body, it is about hunger, disgust; about lust, disease and death as everybody encounter them in its life. This absence is-also- the fruit of the limitation and the insufficiency of memory -and of representation itself- when it tries to reconstruct a passionate line/moment.
On the other hand, fragmentation can be seen as mirroring thinking, as reflecting a certain belief that bodies are the material on which the city discourse is inscribed. The “city” as a political, psychological and a social space but also the city as glass, as concrete and steel, as old rusted steel emerging from underneath a tiered and beaten concrete. The city as transparency, since that lucidity of forethought keeps endlessly preaching and encapsulating us in the scheme of the “catastrophe” eminent revival; that clarity “preserves” our minds in a cold and transparent concrete called fear; but Why not the city as a warm deserted alley where two lovers can kiss passionately, the city as a search for “tenderness”; the tenderness of counting his 93 eyelashes.”