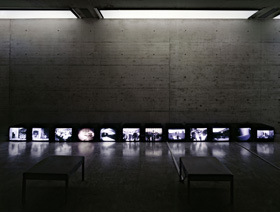 Go down to Beirut Art Center and see a solo exhibition by the prolific and influential German artist and filmmaker Harun Farocki.

Farocki has produced an immense body of film, video and critical analysis that explores the production, dissemination and reception of images and the cultural and political power they wield. The exhibition at Beirut Art Center will present a selection of Farocki’s major video installations, including the earlier works Interface (1995), I Thought I Was Seeing Convicts (2000) and Eye/Machine III (2003), as well as the more recent productions Workers Leaving the Factory in Eleven Decades (2006), On Construction of Griffith’s Films (2006), and Serious Games (2009 & 2010).

In his two-channel video installation, Interface (1995), Farocki returns to the programme he followed in his early work of making “film scientific and science political”. The video shows Farocki at work and sets out a visualised theory of montage, taking its formal inspiration from the design of a conventional video-editing suite. He equates the editing table with a scientific laboratory and a negotiating table, while reflecting the similarities and differences between the aesthetic mechanisms of images and their production conditions. 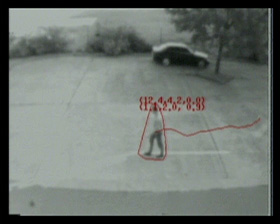 The installation Eye/Machine III (2000) demonstrates how the prolific spread of imaging and simulation technologies has neutralised war and the possibilities for resistance. Recycled imagery shows virtual humans murdered by military simulators as mere pixels on a screen. By extension actual victims of war killed by the impersonal push of a button are dehumanised before death by the war machine’s pixilation. This theme of technology and its relationship to war is further explored in Farocki’s Serious Games (2009 & 2010) series.

Farocki returns to recycled images in I Thought I Was Seeing Convicts (2000), this time drawing mainly from surveillance videos taken from US penitentiaries as well as fictional films. The film highlights with clinical boldness the centrality of images in imposing authority as Farocki juxtaposes the use of the camera with the gun.

In Workers Leaving the Factory in Eleven Decades (2006), the title of which is taken from the Lumière Brothers’ first film, Farocki uses the recurring scene of workers exiting a factory to investigate the history of cinema. The irony of the film rests on the fact that workers have indeed left the factory coinciding with the development of cinema, and prevailing in its wake is image-dominated and service-orientated capitalism.

Farocki continues his commentary on the history of cinema in On Construction of Griffith’s Films (2006), analysing the innovation of the shot and countershot during a dialogue sequence from Griffith’s 1916 film Intolerance. Although this technique is now omnipresent in film, Farocki uses the sequence to illustrate an important milestone in the growing independence of cinematography.

The exhibition is organized in partnership with the Goethe-Institut Libanon and is sponsored by SONY Business and Professional by Nassar 1955.

Biography
Harun Farocki was born in 1944 in Nový Jičín, in the then German-annexed Czechoslovakia. In 1962 he ran away from home in Hamburg and moved to West Berlin before enrolling in the Berlin Film Academy (DFFB).

He made his first film in 1966 and has since made over 100 films for television and cinema, including children’s programmes, 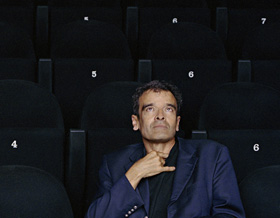 documentaries, essays and feature films. Farocki’s career extends for almost fifty years, from his ‘60s agitprop films against the Vietnam War, his didactic Marxist fiction features of the late ‘70s, and his highly diverse array of documentaries and essay films from the ‘80s and ‘90s. He first rose to prominence in 1973 with his documentary for WDR television The Trouble with Images. A Critique of Television by Harun Farocki, which examined the disparity between words and images in daily broadcasts, instigating a fierce debate in the West German media. In 1974 he started work as a writer and editor for the magazine Filmkritik, where he remained for over ten years. Subsequent films such as Images of the World and the Inscription of War (1988) and Videograms of a Revolution (1992) cemented his reputation as a leading German filmmaker.

In the 1990s he started making works for two or more screens, which moved him from the realm of cinema and television to the art gallery. These so called ‘essay films’ investigate the disparity between the official version of historical events, as portrayed in the media, and that of real life, meticulously analysing the way that society uses photographs and the moving image. Farocki has now established himself as an enduring presence in the art world and his video installations have appeared at the ICA in London (2003), the ZKM in Karlsruhe (2004), at Documenta in Kassel (1997, 2007) and more recently at Jeu de Paume, Paris (2009), Museum Ludwig, Cologne (2009), Raven Row, London (2009-10) and Kunsthaus Bregenz (2010).

Between 1993 and 1999 he was a visiting professor at the University of California, Berkeley. In autumn 2010 he was also a visiting lecturer at the Department of Visual and Environmental Studies at Harvard, Cambridge. He is currently a professor at the Academy of Fine Arts in Vienna.