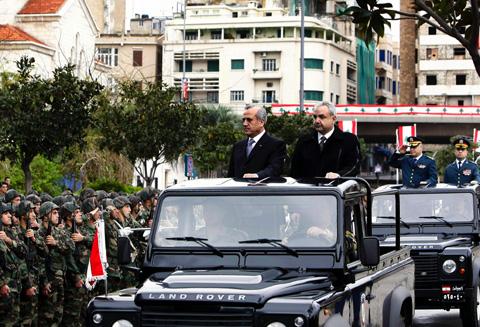 What better to highlight in today’s Around Town than Lebanon’s 67th Independence Day. The yearly event, which celebrates the Independence of Lebanon from France with a military parade in downtown Beirut.

President Michel Suleiman, accompanied by Defense Minister Elias Murr, were part of the 70-minute parade at Shafiq Wazzan Avenue, which was well a well organised and breathtaking. Parliament Speaker Nabih Berri and Prime Minister Saad Hariri were also present on the occasion.

The event included a 21-gun salute fired at the start of the parade after which Suleiman placed a wreath on the Unknown Soldier Monument. Helicopters and a motor parade was also part of the celebration.

The parade included a large number of soldiers and officers from the navy and marines participated in the parade. Suleiman, Berri and Hariri headed to Baabda Palace to receive well-wishers.

BNL wishes everyone a Happy Independence Day, hoping the year to come will be prosperous in so many ways.