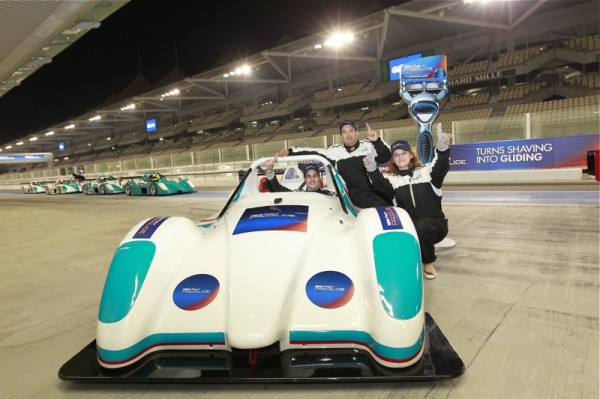 Gillette, the world’s leading Male Grooming brand, has launched its most technologically advanced razor, Gillette Fusion ProGlide™, across the Middle East.  At an event hosted by senior executives and scientists from Gillette and Procter & Gamble at YAS Marina Circuit in Abu Dhabi, guests learned how Gillette’s new ProGlide razor has truly turned shaving into gliding, offering men throughout the region their most comfortable shave yet.

During the event, guests learned about the seven new technologies that feature in the new Gillette Fusion ProGlide razor from Dr Kristina Vanoosthuyze, Principal Scientist at Gillette’s Reading Innovation Centre in England who flew in especially for the launch.  Car Racing Champion Joe Ghanem then explained some of the similarities between the innovations and performance of the new Gillette Fusion ProGlide and those in a racing car, before driving guests around the track at top speed, emphasizing his ‘gliding’ skills through the fast and difficult corners.

“At Gillette, it has always been about listening to men first, and with Gillette Fusion ProGlide, we’ve created an experience that men tell us is more like ‘gliding’ than ‘shaving’,” said JuanCarlos Alfonso, Associate Marketing Director, Gillette.

“By taking the world’s number one selling razor and making it better – dramatically better – we are defining a new standard for the more than 800 million men around the world who trust their faces to Gillette.”

“Our innovation process starts by understanding what men want from their shaving and skin care experience, and combining those insights with world class technology,” said Dr. Kristina Vanoosthuyze. “Gathering feedback from 30,000 men is no small feat, but I am proud to say that Gillette Fusion ProGlide has received an extremely favorable response.”

Sixty-five percent of men experience discomfort during and after shaving, especially when the blades tug and pull – causing a series of unwanted side effects, sometimes described by men as irritation. Improving on Gillette Fusion, the world’s best selling razor, Gillette continues to set the pace as the innovation leader in male grooming with Gillette Fusion ProGlide, which features a redesigned cartridge with thinner, finer blade edges that glide through hair, reducing tug and pull.

Champion driver and Gillette Fusion ProGlide ambassador, Joe Ghanem, said: “I am delighted to work with Gillette on the launch of ProGlide in the Middle East. There are many shared technologies between Motorsport and the innovations in the new Gillette Fusion ProGlide. Having test driven Gillette’s new razor myself, I can strongly say it takes the ‘gliding’ experience to a whole new level of precision and comfort I’ve not experienced before.”

The Science of Shaving and Skin Care

Research into how to achieve a more comfortable shave has been underway for many years, even prior to the launch of Gillette Fusion. Gillette Fusion ProGlide withstood rigorous testing protocols that included more than 30,000 men and involved precise measurement instrumentation used in the aerospace, semiconductor and medical imaging categories.

Building on the breakthrough technology in Gillette Fusion, Gillette Fusion ProGlide incorporates a series of unique technologies that address critical areas for a better shave and deliver incredible comfort and performance:

Gillette’s deep understanding of men and shaving combined with P&G’s expertise in skin science has resulted in advanced Gillette Series 2-in-1/3-in-1 and pre-share pro-glide™ gels, an advanced line of skin care products that drives incredible comfort before, during and after the shave. This new skin care line features the first mass market men’s thermal facial scrub, as well as a cooling skin care lotion and moisturizer with SPF, all of which act to maximize comfort during and after shaving.

“While the razor remains the central component to a man’s grooming routine, we know that the products used before, during and after the shave play an incredibly important role in ensuring shaving and skin comfort,” Dr Vanoosthuyze added.

Each product in the Gillette Fusion ProSeries line was designed by scientists to provide an amazing shave experience and help reduce shaving irritation, including: