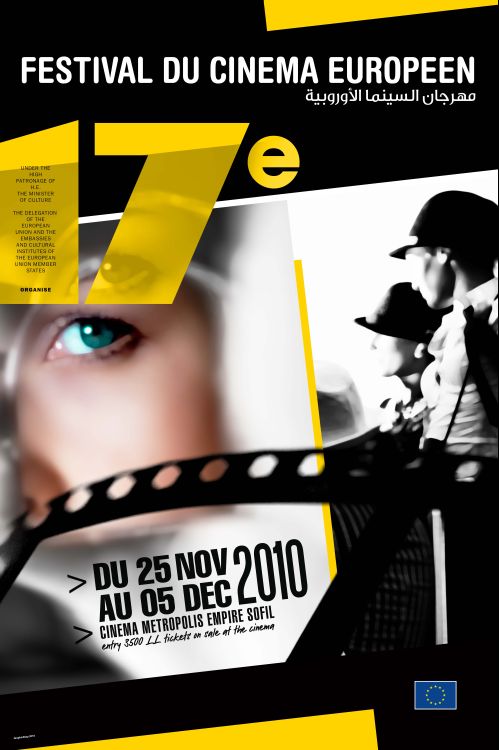 The Delegation of the European Union to Lebanon recently presented the 17th European Film Festival, which will be held from 25 November to 5 December 2010 in the two theaters of Cinema Metropolis Empire Sofil (Ashrafieh). The European film Festival will open on Thursday 25 November with the Belgian film Loft by Erik Van Looy (on invitation).

In order to encourage young talents, the Festival will, for the tenth consecutive year, award two prizes for the Lebanese short films: a First Prize and a Special Jury Prize. Instead of cash prizes, the Festival will reward winners with the opportunity to attend two leading international short film festivals: one winner will attend the Clermont-Ferrand International Short Film Festival (France) and the other will attend the Oberhausen International Short Film Festival (Germany). The jury includes cultural attachés at EU Member States’ Embassies in Lebanon as well as Lebanese cinema critics. On Sunday 5 December*, the Head of the Delegation of the European Union, Ambassador Patrick Laurent, will award the two prizes.

The European Film Festival will also take place in Tripoli (2-5 December), Saida (7-9 December) and Zahle (9-11 December) with a number of films being shown in the three cities.

Within the framework of the Festival, the Metropolis Association organises “Beyrouth tout court”, a workshop on Short Films, from 29 November to 5 December 2010. This initiative aims at helping Lebanese directors to develop their scripts, pitch them in front of a jury and learn about the possible ways to promote their short films once they are completed. Lebanese filmmakers Elie Khalife and Emile Slailaty will assist the directors of the projects that have been selected to develop their scripts before pitching them in front of an international jury. This jury is composed of Amelie Chatellier, head of the distribution department of the Short Film Agency (France), Gerd Blanke, film distributor and expert on online distribution at Onlinefilm (Germany), Pierre Sarraf, director of the Festival and production company Né à Beyrouth (Lebanon) and Raja Zgheib, post-production producer at VTR Beirut (Lebanon).

On Sunday 5 December**, the jury will host a panel discussion on the ways to promote and distribute short films. This panel, which will take place at Cinema Metropolis Empire Sofil, is open to the public. In the evening***, the jury will award the best script which will allow the winning director to participate in the Clermont-Ferrand International Short Film Festival in February 2011. VTR Beirut will support the post-production of one of the participating shorts.

The program is available at the website of the Delegation of the European Union: http://www.dellbn.ec.europa.eu