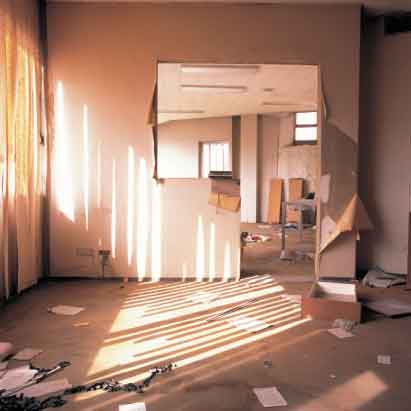 The Industrial Factories is a new series of photos taken by Clara Gebran. The photos deal with the passage of the historical time and the changes that have taken place after the Lebanese civil war in the industrial sector – more specifically in Burj Hammoud. Many of the sites will soon be demolished, yet some are still part operational.

Clara Gebran’s career began in economics, albeit short-lived. Leaving the profession in barely a month, Gebran pursued her dream of becoming a professional photographer instead. Fast forward 15 years and it appears that she has travelled full circle and returns, once again, to the world of economics, or so to speak.

Regularly commissioned to undertake commercial portrait and fashion shoots, Gebran has widened her lens and brings a new composition into focus. While her career is firmly set in photography, her chosen composition, or subject, is the Lebanese economy, or, at least, the buttresses of that economy: the Industrial factories and warehouses of Lebanon’s past.

Gebran’s present photographic images aim to record Lebanon’s industrial heritage like never before. According to Gebran the images offer a new perspective on Lebanon’s industry. “I am telling a story of a forgotten history.” The images themselves depict gigantic empty industrial spaces. Many of the locations have long since closed their doors and the workers vanished just like the industrial smoke that once poured from these industrial giants. Most sites are earmarked for demolition, yet some are still part operational. “I shoot the interiors of the factory which are not operational,” says Gebran. “But mainly I photograph industrial venues which are about to vanish forever.”

An image of an office located in one of Lebanon’s first ever brewery cleverly captures a vintage ambience. The pale blue colour of the brewery’s cupboards emits a faded 1950s opulence. The doors have purposefully been left opened and closed, causing a domino effect as lever-arch files peep through. Adding only the female model, the image cleverly captures the working environment forever on film. No industrial stone is left unturned. Gebran has approached industrial greats such as Filature of Mount Liban, famed for the cotton trade, and an old soap factor. Meticulous inside the venue as she is in choosing her industrial subjects, Gebran is clear what images she wishes to reflect. “The factory owner expects me to shoot images of the machines. I prefer a corner of the factory that portrays the location’s previous life.” One such location is in the Soap factory. Remnants of a soap-splattered wall are the image’s main focus. Light beams pour down the stairs bringing the image to life. “I want to show the exact spirit of the place,” says Gebran. The photographs reflect the size of the huge industrial giants. Using Lambda print format – 120cm by 120cm – Gebran believes the presentation of the images must also follow suit. “I am visiting huge places, the presentation must be similar.”

Gebran’s love of photography developed at the tender age of 12. “I used to take Father’s camera,” says Gebran, “and shoot family portraits.” Evidence of such beginnings adorns the wall of Gebran’s family apartment in Beirut. Further photography collections depicting biblical scenes and shot by European photographers at the turn of the 20th century hint at Gebran’s present love affair with the past. But that’s not to say she is stuck there. “I like the past, I like the future. For me its continualness, as without the past, there is no future.” With exhibitions both here, most recently at the Running Horse Gallery, and in Dubai, Gebran’s works form part of private collections in the United States, the UK, the UAE, Kuwait and Africa.

“Perhaps people find the mark of time sad”, concludes Gebran, “but for me, it is beautiful.”